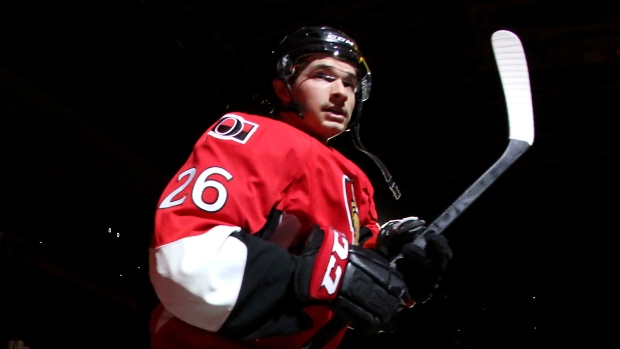 OTTAWA - After getting a brief taste of the NHL last season, Matt Puempel wants to do whatever it takes to get back to the big leagues.

To get there, he'll have to beat out another young, hungry forward in Shane Prince.

The two 22-year-old left-wingers are the favourites fighting for a lone spot on the Ottawa Senators roster.

An opening was created after unrestricted free agent Erik Condra chose to sign with the Tampa Bay Lightning this past summer. Puempel and Prince quickly realized what it could mean for their future.

"I was here on free agency day and (assistant general manager) Pierre Dorion came up to me and asked me if I was happy," Puempel said. "It definitely makes you a little bit more motivated and when you see a light like that at the end of the tunnel. It makes you push a little harder in the summer."

The two were drafted in 2011 — Puempel was a first-round pick, 24th overall, while Prince was selected 61st overall.

Both players were recalled by the Senators' last season, but it was Puempel who had the better opportunity with two goals and an assist in 13 games before suffering a high ankle sprain that ended his season. In comparison Prince played just two games and had one assist.

The Senators signed Prince to a one-year, two-way extension this summer and many believe he has the inside track to start the season in the NHL seeing as he would have to clear waivers whereas Puempel wouldn't.

Both will have the opportunity to plead their case Wednesday night as the Senators take on the Buffalo Sabres in pre-season action.

"For those guys I want to see that they can think the game," said head coach Dave Cameron. "I want to see that they can play without the puck as well as they can with the puck. I think both guys have the designation that they're offensive guys, but to play in the NHL for those two guys they have to establish their game first and their game is a 200-foot game as good without the puck as you are good with it and then the offence will come off of that."

While the two have been teammates in Binghamton the past two seasons, both players agree at this point it's every man for himself.

Prince scored in the Senators 4-3 overtime loss to Toronto on Monday and says he plans on maintaining the momentum. Prince led the Binghamton Senators in scoring last season with 28 goals and 37 assists and finished sixth in AHL scoring.

"I feel great right now," said Prince. "I got my first game under my belt and I'm going to build off that and do well here."

While Puempel would love to contribute offensively he says he plans on following Cameron's advice of just sticking to what he knows.

"You just have to be responsible defensively and there's a lot more things than points at the NHL level," said Puempel. "I was told just play like last year and that's what I'm trying to do."