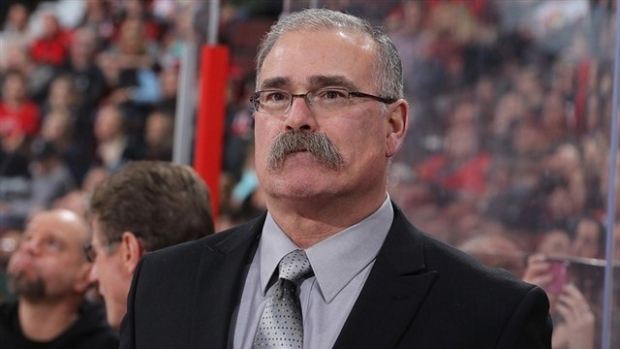 OTTAWA - Less than 18 months after being honoured as the NHL's coach of the year, Paul MacLean is out of a job.

The Ottawa Senators fired MacLean on Monday after an 11-11-5 start, though the problems team executives had with the coach extended back into last season when the Senators missed the playoffs.

Senators general manager Bryan Murray told a news conference Monday that assistant Dave Cameron will be the new head coach of the team.

"I've had some tough days lately," said Murray, who is currently undergoing cancer treatment and watched longtime Senator Daniel Alfredsson retire last week. "This is one of them."

MacLean, the first NHL coach to be fired this season, wore out his welcome among Senators players with tactics that led to many games in which they were outshot. Through 27 games, Ottawa has given up the second-most shots in the league behind only the Buffalo Sabres.

Murray, who broke the news to MacLean at 9:30 a.m. Monday morning, said he had grown frustrated watching the Senators struggle with turnovers night after night.

"We continue to be a big turnover team in our zone," said Murray. "Our goaltending has been, to say the least, outstanding most nights to give us a chance to win hockey games. The chances against our team are, some nights, atrocious. I think there's an obligation for a lot of people, the players included, to perform better than that. But the leader of the pack always is the coach."

MacLean's defensive tactics that allowed opponents easy entry into the attacking zone were responsible for the Senators being outshot 34.4 to 28.8 on average this season.

"I think positioning in our own end is a big, big issue," said Murray, adding that he would talk to MacLean about the problem but "nothing changed in that area."

Murray also said there was an "uneasiness" in the dressing room.

"Some of the better players felt that they were singled out a little too often maybe," said Murray. "That's today's athlete. They want to be corrected, coached, given a chance to play without being the centrepoint of discussion in the room."

"I think he'll relate a little bit to what we need here with some of our youth in particular," said Murray, who agreed with one reporter that communication with MacLean had become a "one-way street."

"This sometimes happens when there's pressure on people, they're not as open to listen and take ideas and go back and forth in the communication part of it," he said. "Players today more than ever need and want that."

Cameron has extensive coaching experience at the Junior A and AHL levels, including coaching the 2011 Canadian world junior team, but has never been an NHL head coach.

In parts of four seasons the Senators went 114-90-35 under MacLean, making the playoffs in his first two seasons.

MacLean won the Jack Adams Trophy as NHL coach of the year in the lockout-shortened 2012-13 season after leading a team ravaged by injuries to Jason Spezza, Erik Karlsson and Craig Anderson to the playoffs.

The Senators have the lowest payroll in the league at US$56,280,726, according to CapGeek. They're 10th in the Eastern Conference.

MacLean, a 56-year-old from Antigonish, N.S., who previously served as an assistant to Mike Babcock in Anaheim and Detroit, was in the first season of a new three-year deal.

Murray said after last season, he felt MacLean deserved a chance to redeem himself.

"I was really in his corner to come back," he said. "Sometimes you have a bad year."