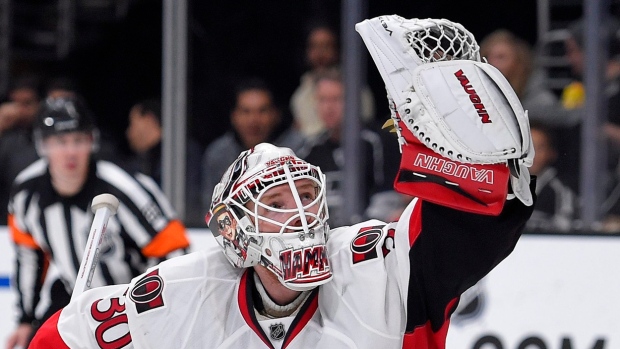 OTTAWA - Finally cleared for action, Andrew Hammond is looking forward to proving he's still the goaltender that backstopped the Ottawa Senators during last season's improbable run to the playoffs.

The 27-year-old missed the first two weeks of the season with a groin strain, but he took part in practice Tuesday morning and declared he was ready to play should he be called upon on the Senators' two-game road trip that features stops in Columbus and Pittsburgh.

"To be honest I was surprised when they told me probably two weeks, but I think we're coming in a little shy of that," Hammond said of his injury. "I feel like I've always been someone who kind of heals quickly so to have it drag on longer than I thought (was hard). In my mind I thought I was going to be ready for the opener, and obviously when it comes to be the day before and you're really not close you kind of get a little discouraged."

The Senators (2-1-0) know this two-game road trip will be a good challenge, as Pittsburgh and Columbus will be hungry after slow starts to the season.

The goaltender nicknamed "Hamburglar" rose to prominence last season after compiling a 20-1-2 record in relief of Craig Anderson and Robin Lehner, who were both injured. He was instrumental in the Senators advancing to the playoffs and was rewarded for his performance in the off-season with a three-year contract.

Hammond suffered the injury Oct. 1 and was expected to miss at least two weeks. Having never experienced a groin injury, Hammond admits it was difficult to play the waiting game.

"That was maybe part of the reason I didn't know really what to expect," he said. "It really is the first time going through a groin injury and it is more common for goalies, but for me it's something that I've never had to deal with."

Hammond is confident that with the time and work done over the past two weeks he can keep from getting injured again.

"We have a regimen for me now going forward, and I've been sticking to that over the last two weeks," Hammond said. "To be perfectly honest I feel a little bit better now than I did before and just putting a little bit more emphasis on those muscles in your body. Obviously I'm kind of seeing the benefits of that now."

Senators coach Dave Cameron didn't say exactly when he expects to give Hammond his first start, but with the Senators playing back-to-back against the Blue Jackets and Penguins he said, "he'll probably get a game somewhere."

With Hammond ready, the Senators reassigned rookie Matt O'Connor to Binghamton of the American Hockey League. O'Connor made his NHL debut Sunday in a 3-1 loss to the Montreal Canadiens.

Notes — Forward Curtis Lazar's status was unclear after he was seen hobbling after blocking a shot during Sunday's game. He missed Tuesday's practice for a maintenance day, but is expected to travel with the team. Shane Prince would get an opportunity to play his first game of the season should Lazar be unable to play on the upcoming trip. ... Cameron said he would also like to see defenceman Chris Wideman get his first game.