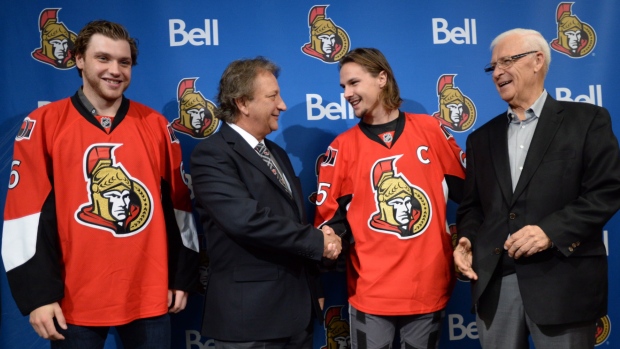 The Ottawa Senators made some major moves on Thursday, announcing the signing of winger Bobby Ryan to a seven-year, $50.75 million contract extension and naming defenceman Erik Karlsson their new captain.

Follow coverage and reaction all day on TSN Radio 1200 Ottawa.

Ryan's deal includes a full no-movement clause and a partial no-trade clause, where he has to submit a list of 10 teams if requested.

Ryan said the decision to make a long term commitment to the Senators was a "no brainer" as he and his fiancee believe Ottawa is a place "where we could build a family, start a family, call home and everything that we've experienced here in the last year has hinted at none other than that."

"We're very, very happy that we were able to get it done," added Ryan. "I promise you we'll give it everything we have night in and night out to uphold our end of the contract."

Ryan scored 23 goals and added 25 assists in 70 games with the Senators last season, his first with the club.

The 27-year-old was acquired from the Anaheim Ducks in July of 2013 in exchange for Jakob Silfverberg, Stefan Noesen and a 2014 first-round pick, which the Ducks used to select forward Nick Ritchie, 10th overall.

Ryan has one year remaining on his current contract worth $5.1 million.

Karlsson replaces Jason Spezza, who was traded to the Dallas Stars this past summer after holding the captaincy for one year. Chris Phillips and Chris Neil remain alternate captains.

The 24-year-old Karlsson thanked teammates past and present for helping him become the player he is today.

"I'm a little bit nervous actually as I don't know what to say," said Karlsson. "It's a good feeling. It's an honour to be a captain of a Canadian team and it's not something that I could have hoped for when I came here, but I embrace it and I'm very much looking forward to the responsibilities to come. I am right now a very happy guy and I look forward to the upcoming season."

Senators general manager Bryan Murray said the decision to make Karlsson captain made sense as they always knew they wanted him to take on a leadership role.

"We knew in the very near future he was going to be (captain) and we finally just decided that if he's going to be it why not be it now," Murray said. "I think his growth off the ice, his attitude, the conversations we've had since last year and the fact he's back to full health and really wanting to be a focal point of this hockey team - all those reasons. The most important one obviously was we just felt he was the right guy because he had that personality to step up and take charge and be forceful, but considerate of his teammates."

Karlsson, who was drafted 15th overall by the Senators in the 2008 NHL Draft, made his Senators debut in the 2009-10 season, scoring five goals and 26 points in 60 games as a rookie.

He is coming off his first career 20-goal season, with 20 goals and 74 points with the Senators.

In 315 NHL games with the Senators, Karlsson has scored 63 goals and 237 points.