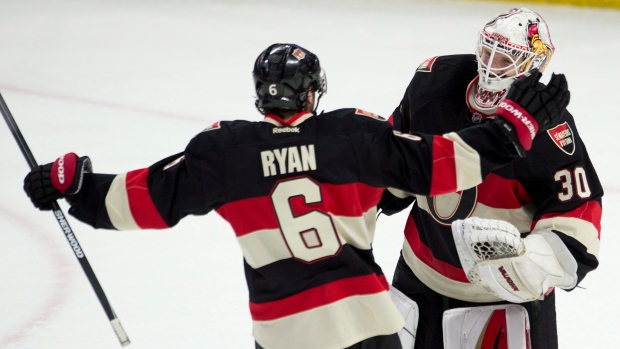 On Thursday the Senators defeated the Bruins 6-4 with the winning goal deflecting in off a Boston skater.

"We're not critiquing too much when we come in with two points right now," said Bobby Ryan, who was credited with the game winner. "Morale is high so you don't want to mess with that either."

With the win, the Senators find themselves just two points back of the Bruins for the final wild-card spot in the Eastern Conference with a game in hand.

As big as Thursday's win was, the Senators know nothing has been accomplished yet.

"We won a big game here, but that's all we've done," said Senators coach Dave Cameron. "We're not in the playoffs yet. We'll enjoy this, but reality hits again (Friday). We're still on the outside looking in and I'm hoping that balance brings out the best in us."

With the game tied 4-4, Ryan brought the sold out crowd of 19,270 to its feet as he scored to give Ottawa a one-goal lead midway through the third period.

Ryan put a shot on goal and the rebound deflected in off of Boston's Zdeno Chara.

Turris added an empty-net goal to seal the win.

The Bruins admitted to feeling some pressure knowing how close the Senators have inched towards them in the standings.

Tied 2-2 to start the second, Legwand gave Ottawa the lead as he converted on a great pass from Erik Condra.

The Bruins tied it back up midway through the period as they made the most of a two-man advantage. Spooner scored his second of the game, putting an end to Hammond's streak of consecutive games having allowed two or fewer goals.

"Obviously I wasn't happy when the (third) goal went in," admitted Hammond. "I said it (Thursday) morning, getting the win was a lot more important to me than the streak. It was a weird game, a lot happened and we just showed a lot of character fighting to the end."

The Senators came right back and Pageau scored shorthanded to give Ottawa a 4-3 lead, but the Bruins tied the game, yet again, on Krug's goal at the 13-minute mark.

"We didn't take care of our zone, especially in front of the net, and that's where they got their goals and most of their chances," said Boston's Patrice Bergeron. "Usually when you score four goals it should be enough to win a game."

A whacky first period saw the teams play to a 2-2 tie. Turris opened the scoring at 19 seconds and the Bruins answered right back 40 seconds later as Soderberg beat Hammond with a floater from the blue-line.

Boston took the lead at the four-minute mark as Spooner's shot was deflected, but the Senators scored the equalizer late in the period as Michalek picked up his 200th NHL career goal.

This was the final regular-season meeting between the two teams.

Note- Hammond missed the anthems as he broke a skate lace stepping on the ice and had to turn around and hurry back to the dressing room. He made it back just as the officials were ready to drop the puck. Fans have started throwing hamburgers on the ice after games and Ottawa's Curtis Lazar was more than happy to pick one up and eat it as he left the ice.