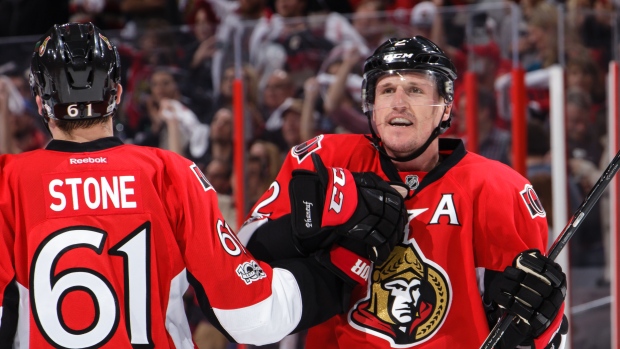 The Ottawa Senators have asked defenceman Dion Phaneuf to waive his no-movement clause so they can expose him in the upcoming expansion draft, according to TSN Hockey Insider Pierre LeBrun.

The 32-year-old has yet to make a decision.

Teams had until 5pm ET on Monday to ask players with no-movement clauses to waive them for the June 21 Vegas Golden Knights expansion draft. The Sens want Phaneuf to waive his no-move clause so they don't have to use a protection spot on him.

The Senators are projected to protect Erik Karlsson and Cody Ceci in the expansion draft. Phaneuf waiving his no-move would allow the team to protect Marc Methot, Mark Borowiecki, Chris Wideman or Frederik Claesson.

The veteran just completed his first full season in the nation's capital, scoring nine goals and 21 assists over 81 games. He added another goal and four assists over 19 playoff games as the Senators made it to the Eastern Conference Final.

Phaneuf played 20 games with Ottawa last season after they acquired him from the Toronto Maple Leafs in February, 2016. He was sent to the Senators, along with Matt Frattin, Casey Bailey and two others in a nine-player deal with their provincial rival.

Phaneuf has another four years with an average annual value of $7 million left on his contract.