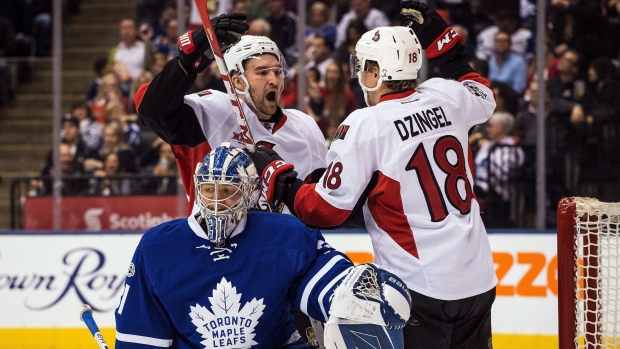 TORONTO — The Ottawa Senators have the Atlantic Division lead in their sights.

Mark Stone had a career-high four assists and five points as the Senators earned their fourth win in the last five games Saturday night with a 6-3 victory over the struggling Toronto Maple Leafs. Ottawa (68 points) now trails Montreal (70 points) by only two points for the division lead with three games in hand.

"We like where we're at. We're in a good spot," Stone said. "But there's a little bit more that we want. Obviously there's teams coming and we want to try and create separation so the only way to do that is keep winning hockey games."

Derick Brassard chipped in with two goals and an assist, Kyle Turris added three helpers of his own and Craig Anderson made 34 saves in the Senators' third win in the Battle of Ontario this season. The Leafs had a chance to pull within a point of their division rivals, but ultimately dropped their eighth game in the last 11 (3-6-2).

Toronto was without 19-year-old Mitch Marner (48 points this season), who's sitting out two games this weekend with a suspected right shoulder injury.

A acrimonious start between the two teams saw the Sens grab the lead with two quick goals late in the first frame.

Chris Wideman got the opener after Toronto failed to capitalize on a brief five-on-three advantage. Stone got the play started when he swiped the puck from Nikita Zaitsev in the corner. Ryan Dzingel added the second marker 20 seconds later on a deflected Marc Methot point shot.

The Leafs rushed back with two of their own in quick succession after killing off a five-on-three lasting one minute 49 seconds.

Pressure from a Auston Matthews-led line spurred the effort. After the 19-year-old missed with a shot wide, Morgan Rielly grabbed the puck along the wall and carried it out to the point before firing it through a maze of bodies for his third goal this season.

Rielly's goal got the crowd at Air Canada Centre going and the home team seemed to feed off their enthusiasm.

Zaitsev fired a shot from the right point which snuck through the pads of Anderson, but Nazem Kadri's first attempt on the rebound came up short. Kadri stayed with it, though, and sent the puck off Dzingel's helmet from behind the Senators goal and into the net for his 24th goal of the year.

Dzingel had gone down to the ice to prevent Kadri from scoring on the initial rebound.

The Leafs got their first lead of the night two minutes into the third when William Nylander fired a wicked shot past Anderson from the right face-off circle on a Toronto power play.

He was set up on the play by Matthews, who moved into a share of the Leafs scoring lead with his 48th point of the year and second assist of the night. Nylander and Matthews were reunited with Marner sidelined and were a dangerous force against Ottawa, pushing 60 per cent puck possession.

Ottawa tied it with Mike Hoffman's 19th goal of the year 3 1/2 minutes after the Nylander goal, the 27-year-old rifling a shot from the right face-off circle off the post and in behind Andersen. The Sens went ahead 54 seconds later on a power play with Brassard stuffing an Erik Karlsson rebound under Andersen with help from Stone, who notched his third assist of the evening.

He added another helper on Brassard's empty-netter, also scoring one himself with Toronto's net open.

Stone now has 46 points on the year, second on the Senators to Karlsson, who has 49 points after a two-assist night against the Leafs.

Ottawa has been rolling under first-year coach Guy Boucher and are now 11-5-2 since Jan. 8 — tied for the fourth-best mark in the NHL in that span. Stone credited the group for "embracing" defensive hockey. The Senators are tied for 11th in goals against per-game this season (2.64) after finishing 26th last season (2.94).

The Leafs, meanwhile, continue to scuffle.

Babcock said his team needed to play better structurally in the defensive zone to pull out of a stretch that's seen them allow 42 goals in the last 11 games.

Their hold on a final wild card spot is slipping while divisional foes like Ottawa and Boston pull ahead.

"The reality is we're all big boys, we can read the standings. You've got to win hockey games," Babcock said.

After the latest defeat, Babcock told his team to forget about the loss to Ottawa and focus on Sunday's game against the Carolina Hurricanes. The Leafs have lost nine times in 13 games on the second half of back-to-back sets this season (4-8-1).

"Mentally we haven't dug in enough," Babcock said of back-to-backs, echoing the message he delivered to players. "So we have to win a game. So you can feel for yourself if you want. No one else is going to. You've got to find a way to compete harder and find a way to win. That's all there is to it, it's that simple."