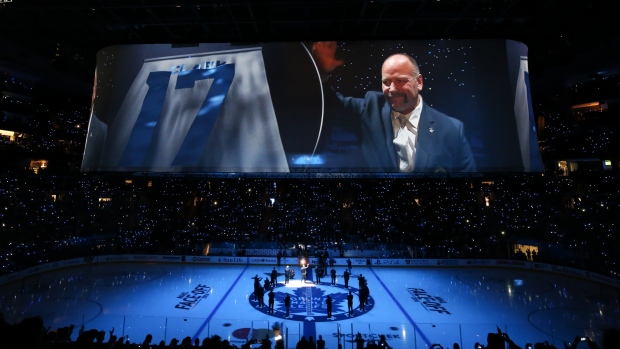 The Toronto Maple Leafs announced four additions to their monuments display outside Air Canada Centre on Saturday evening with Wendel Clark, Red Kelly, Frank Mahovlich and Charlie Conacher completing a set of 14 franchise greats from the first 100 years of the organization.

Team president Brendan Shanahan said the row was full for the foreseeable future.

"But what we've said is we'd be thrilled to death to have to get some architects down there to Legends Row to figure out a way to extend the bench," said Shanahan during the first intermission of a tilt between the Leafs and Ottawa Senators.

The team has been honouring franchise greats as part of the club's centennial season, naming the 100 greatest players in team history at one point while retiring — for the first time — a series of numbers.

The first overall pick of the 1985 draft, Clark remains one of the more popular players in team history. He played 13 of his 15 NHL seasons as a Leaf, winning fans over with a rugged style, knack for goal scoring and of course, that glorious moustache.

Clark set the franchise rookie record with 34 goals in the 1985-86 season. He served as the team's captain for three seasons and was traded to Quebec in 1994 in a package that netted the club future franchise scoring leader Mats Sundin.

Clark serves as an ambassador for the team to this day.

"When I look at that row I'm like the fourth liner out there," said Clark with a grin after the announcement.

Kelly was a Hall of Famer who won four Stanley Cups as a centre for the Leafs. He joined the club after a lengthy tenure as a defenceman for the rival Detroit Red Wings where he also captured four Cups and a Norris Trophy. He and Mahovlich — nicknamed "The Big M" — were Leafs teammates (and sometimes linemates) for three of those Cup victories in Toronto, Mahovlich winning another in 1967.

A prodigious goal-scorer who won the Calder Trophy as the NHL's top rookie in 1958, Mahovlich would later pot 48 goals in the 1960-61 season, a team record that stood for 21 years. Rick Vaive eventually broke the mark with 54 goals in the 1981-82 season.

"I am honoured to have my likeness depicted in a statue as a Toronto Maple Leaf and particularly to be in the company of my friend and teammate of seven years Red Kelly," Mahovlich said.

Mahovlich raved about Kelly's ability to transition from defence to forward, noting how those like Gordie Howe and Bobby Orr tried it briefly during their careers, but ultimately failed.

Conacher was one of the earlier stars in Leafs history, a Toronto native who led the NHL in scoring five times and — like Kelly and Mahovlich — also earned a plaque in the Hall of Fame. He was inducted in 1961.

Shanahan hoped some of the team's current players could one day get their place on the row. In attendance alongside Clark — Kelly and Conacher were represented by family members — Mahovlich said he felt the good vibes of the current Leafs squad.

"When I get into a taxi in Toronto now they're very positive," said Mahovlich. "Everybody seems so positive about this team. I think they're heading in the right direction."