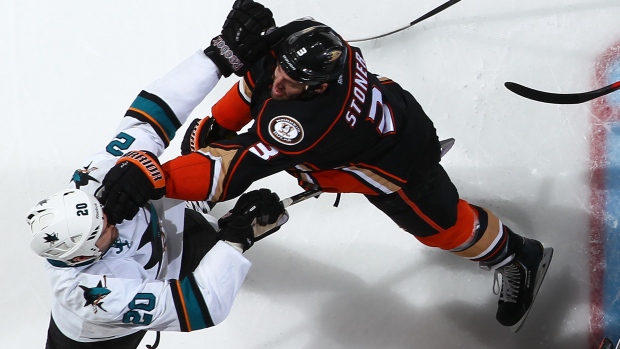 San Jose Sharks forward John Scott has a phone hearing  with the NHL Department of Player Safety on Wednesday at 11:30am et/8:30am pt for his butt-end on Anaheim Ducks defenceman Tim Jackman.

Scott swung his right hand backward and struck Jackman with the butt end of his stick in the second period of the Sharks 3-2 overtime loss to the Ducks on Monday night. Jackman fell to ice and remained down for several minutes before leaving to the dressing room. He did not return.

Scott was suspended two games earlier this season for leaving the bench on a legal line change and starting an altercation with Jackman.

He was also suspended seven games in October of 2013 for a check to the head of Boston Bruins forward Loui Eriksson.

An in-person hearing gives the league the right to suspend Scott for more than five games.