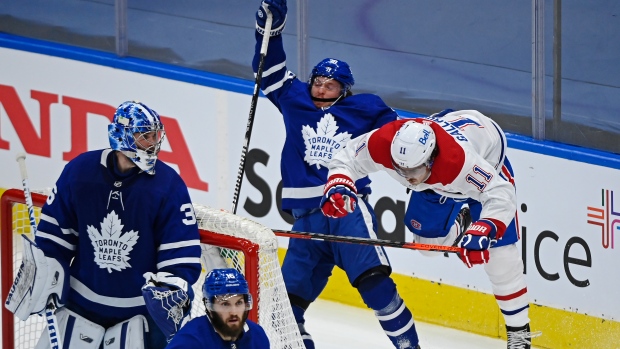 The Maple Leafs held a limited media availability before travelling to Montreal on Sunday.

The Leafs struggled to draw penalties during the regular season finishing tied for 20th in power-play opportunities (2.8 per game). But Toronto has already been on the man advantage 10 times through two playoff games.

"Montreal has made it very clear that they want to be very physical," noted coach Sheldon Keefe following Saturday's win. "I think the term they used was they want to make it a 'war.'"

"It's going to be a war out there," Canadiens winger Josh Anderson had promised before the series opened.

"If you're going to do that you're at risk of getting penalties called against you," Keefe continued. "Our job, as a power play, is to make them pay for that."

The previously snakebitten Leafs power play connected twice on six attempts in the 5-1 win in Game 2.

The takeaway for Montreal?

"They're calling a lot of stick penalties," said Canadiens defenceman Joel Edmundson. "They're letting the bodychecks go so just be physical and finish every check, but be smart with your stick. I think that's where you have to draw the line."

The Habs repeatedly crossed the line in the second period on Saturday. First, Brendan Gallagher was whistled for high sticking T.J. Brodie. A couple minutes later Artturi Lehkonen was sent to the box for slashing Wayne Simmonds. Shortly after that penalty expired, Jesperi Kotkaniemi was called for cross-checking Morgan Rielly.

The Canadiens didn't like the calls and lost focus.

"We were just kind of going at the referees instead of the Leafs," Edmundson admitted. "I think that kind of killed us there."

"We had the puck the entire second period," Keefe pointed out, "and that really, I think, caused some fatigue on the other side."

Keefe, for the record, "hated" the holding call on Zach Hyman in the first period, but acknowledged the officials "have the toughest job of anybody out there."

The Canadiens led the NHL in hits in the regular season so physicality is a big part of their identity. Interim coach Dominique Ducharme was asked to assess the effectiveness of his team's physicality in Game 2.

"There's some good, some bad," he said. "If you look at the first period, I felt we did it the right way."

"I just thought we had a really engaged hockey team all the way through our lineup," Keefe said.

It certainly helps when the team's top player does his part and Auston Matthews was throwing his weight around all over the ice. He's tied with Hyman for the team lead with nine hits in the series.

"He's proven that he's a pure goal scorer and he's going to score huge goals for us," said defenceman Zach Bogosian, "but to see him physically engaged, he's a big dude and when he plays that intense it kind of bleeds into the group. You can see how hard he's competing and it's a trickle-down effect. It's awesome to see."

Auston Matthews scored one of five @MapleLeafs goals on Saturday and has 13 in 27 career playoff games for the franchise. #StanleyCup#NHLStats: https://t.co/97S8cQ5oAk pic.twitter.com/b3rApdMpPL

Matthews scored a goal, the game winner, and added two assists on Saturday.

"Going down 0-1, this was a do-or-die game for us so I think everybody stepped up," Matthews said.

"Auston was our best player," said veteran forward Jason Spezza. "We know his play rises in the bigger moments."

Matthews was also dominant at the dot winning 16 of 20 face-offs.

"I guess the best way to describe it is just very complete," said Keefe. "Extremely competitive, physical on the puck, made plays, scored a huge goal for us, played with all sorts of authority, strong at the face-off dot. There wasn't really anything that he didn't do extremely well."

It was an up-and-down start for Toronto's new second line, which was on the ice for Montreal's lone goal on Saturday night. With John Tavares out, Nick Foligno has shifted to centre skating between Alex Galchenyuk and William Nylander.

"It felt pretty good," said Galchenyuk, who was a healthy scratch in Game 1. "I thought we created a few chances. There was a few times, you know, we misunderstood each other. We just haven't played together [a lot], but as the games go on we'll feel comfortable and adjust and help each other out."

Per NaturalStatTrick.com, the Canadiens outshot the Leafs 9-4 during the eight minutes and 43 seconds Toronto's second line was on the ice in five-on-five play.

The Leafs opted not to practise on Sunday before heading to Montreal. The schedule is condensed with Game 3 and Game 4 on consecutive nights so it's tricky to build chemistry right now.

"We just had one quick (15-minute) practice so the more reps we get, the more we're out there on the ice, that's where the comfort level will come in," Galchenyuk said.

Nylander played almost the entire season with Tavares, but insists his mindset doesn't change with his longtime linemate sidelined.

"I just try to play the same way," the 25-year-old said. "It's tough to lose a guy like that who's meant a lot to myself and I've been learning a lot from him. We want to get together here and win a couple games for John and hopefully he can get back and play later on."

Nylander has scored in both games of the series with Saturday's goal coming on the power play.

Nylander was asked where defenceman Rasmus Sandin, who scored his first Stanley Cup playoff goal on Saturday, gets his confidence.

"Me. I taught him," Nylander said with a laugh. "He's living with me so I guess he learns a little bit. He watches and he sees and he learns."

On Thursday, Sandin got beat on the Paul Byron game-winning goal, which came during a Leafs power play.

"He makes a mistake there," acknowledged Keefe. "I think his mistake is probably that he didn't go off the ice on his way back for that puck so that he wasn't tired in that instance. That was the mistake and, of course, that stood out in my mind."

But after reviewing the video of Game 1, the coach liked a lot of what Sandin showed in his first Stanley Cup playoff appearance. So, he kept him in the lineup instead of going to the more experienced Travis Dermott. And he kept the 21-year-old on the top power play unit instead of going back to Rielly, the longest-serving Leaf.

"I just think that with Rasmus, the payoff can be really big for us in terms of his skill-set and what he can bring," Keefe explained. "That requires a little extra patience on our side. I just had belief that he was going to be better than he was in the first game."

Sandin rewarded that faith by scoring his first NHL goal since Jan. 29, 2020. He had to wait through a coach's challenge by Montreal before being able to really enjoy it.

"I didn't know what the challenge was, to be honest," Sandin said. "I was a little nervous, to be honest, because we were just talking about how I haven't scored in a year-and-a-half or something like that. I really wanted that to be a goal and I was super happy when they called it."

The Leafs power play has lacked a legitimate shot threat from the point with only three man-advantage goals coming off the stick of defencemen in the last two regular seasons. On Saturday night, Sandin beat Carey Price with a blast.

"When you play with those players that you have on the power play, it’s not too hard for me," Sandin said. "I got it right in my wheelhouse and took a step into it and I hit the right spot this time."

Sandin's late-season rise has been among the more compelling stories around the Leafs. He was buried on the depth chart early in the season behind Dermott and Mikko Lehtonen. Then, after getting sent to the minors, Sandin sustained a foot fracture in his first game with the Marlies. Add it all up and Saturday was only his 12th game since the pandemic began.

You wouldn't know it from watching him play.

"He's so poised and he's deceptive," said Matthews. "He's extremely skilled. For how young he is, it doesn't seem like these big moments really shake him at all. He's extremely confident and makes really nice plays and sees the ice well."

The Leafs are scheduled to hold a skate at the Bell Centre on Monday morning.