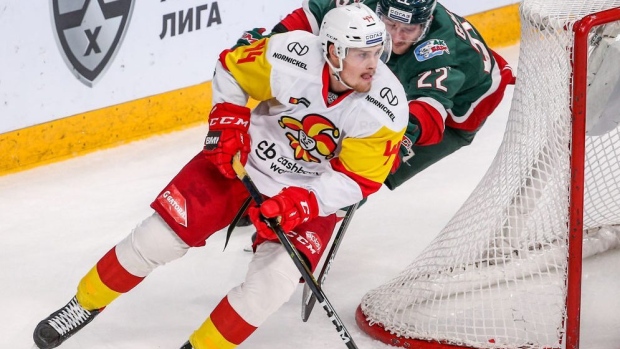 TORONTO — The National Hockey League season is less than a week old, but the Maple Leafs are already performing salary-cap gymnastics, placing veterans Jason Spezza and Aaron Dell on waivers Sunday as they learned rookie Nick Robertson would miss at least four weeks with a knee injury suffered in Saturday’s win over Ottawa.

With the uncertainty surrounding who would or wouldn’t be available to the Leafs for Monday’s game against Winnipeg, head coach Sheldon Keefe decided Toronto would debut rookie defencemen Mikko Lehtonen with an 11-forward, seven-defencemen lineup against the Jets.

“The expectation is we're going to go 11-7 today, and then determine who the 11th forward will be,” Keefe explained on a Zoom call with reporters. “We wanted to give [Lehtonen] last week as a chance to watch the games and be in more meetings and get a better feel for things. And then we don't want too much time to elapse before he gets in a game. So, we want to get him going here today and really try to get a feel for how he can compete in the league and give him a chance to do that.”

When the NHL's waiver deadline passed at noon, Dell had been claimed by the New Jersey Devils, while Spezza cleared.

In placing both Spezza and Dell on waivers, the Leafs cleared up about $1.5 million in cap space, putting them just over $2 million below the NHL’s $81.5 million threshold. The Leafs can now add players who don’t require re-entry waivers from their taxi squad (or Stay Ready Squad, as Keefe’s coaching staff has dubbed it) onto the main roster to get back as close as possible to the cap.

That way, when Robertson is placed on Long Term Injured Reserve, the Leafs will have an additional $800,000 to work with, and they can recall Lehtonen and others they want on the main roster while adhering to the constraints of the cap.

The Leafs had already elevated Pierre Engvall earlier Monday from the AHL’s Toronto Marlies onto the taxi squad. Adam Brooks took line rushes with Spezza and Wayne Simmonds on the team’s fourth line during morning skate, but that was only because Spezza’s availability for Monday’s game was still in question.

Dell was also on the ice for Toronto’s skate, but Keefe seemed resigned to the goalie’s imminent departure. The 31-year-old netminder was a backup for San Jose from 2016-20, appearing in 107 games with a .908 save percentage, and was likely to be snapped up by one of several teams in need of goaltending around the league. Toronto will now have Michael Hutchinson, who signed a two-year, $1.45 million contract with the team in October, at its third-string goalie.

“He's an established goaltender in the league and we knew when signing him it would be difficult to get him through waivers if it came to that,” Keefe said. “Now here we are, and we'll see how it goes for him today.”

Keefe has held a similar wait-and-see mentality with Lehtonen, who was never drafted by an NHL team before signing a one-year, entry-level contract with Toronto in May. At first Lehtonen had seemed a lock to dress for Toronto on opening night, but days before Keefe shuffled him from a top-six spot on the Leafs’ blueline to the team’s taxi squad, citing concern over whether the KHL import was ready for the demands of an NHL contest.

Lehtonen is coming off the best season of his career in 2019-20 with the KHL’s Jokerit Helsinki, producing 49 points in 60 games to earn the league’s Defenceman of the Year honours. The 27-year-old had been slotted onto the Leafs’ second power-play unit during training camp and even registered two assists in the full-team scrimmage they staged to replicate an exhibition game, but Keefe was adamant that Lehtonen would benefit from being held back.

“He's going to go back on the power play and get opportunity there, and at even strength he'll get his minutes. We're looking for him to show that his game can translate seamlessly to this level,” Keefe said of expectations for Lehtonen on Monday. “That’s the greatest challenge for players like him is the nature of training camp and no exhibition season, you can't really get the kinks out, you can't make the adjustments, you can't make the mistakes in those games that don't matter and then have it cleaned up by the time you're playing for real.”

The same holds true for winger Alexander Barabanov, another off-season signing from the KHL who was demoted to the taxi squad after playing in Toronto’s first two games. What happens next for him will also likely be determined by how the Leafs proceed with managing their cap, and how successful an 11-7 look is against the Jets.