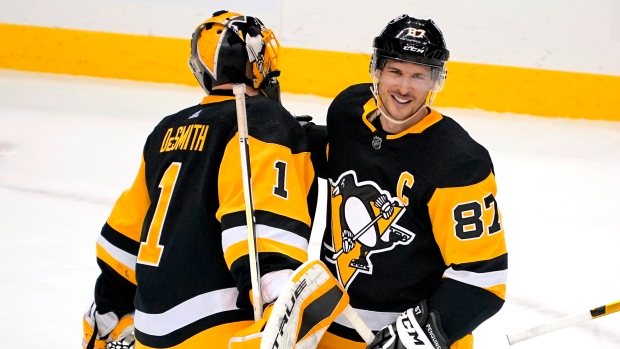 PITTSBURGH — Sidney Crosby and Bryan Rust each scored their 20th goal of the season, and the Pittsburgh Penguins beat the New Jersey Devils 4-2 on Saturday.

Crosby got an empty-netter with 0.1 seconds to play. His goal came following a tense net-mouth scramble in which the Devils nearly tied the game.

Jeff Carter, who was acquired by Pittsburgh in an April 12 trade with the Los Angeles Kings, scored his 10th of the season and second in three games. Casey DeSmith stopped 34 shots and Jared McCann scored a power-play goal for the Penguins, who have 13 wins and points in 15 of their last 18 games overall.

Pittsburgh completed a three-game series sweep of New Jersey. The Penguins, who have points in their last nine home games, have nine wins in their last 12 games against the Devils.

New Jersey dropped its ninth straight game and 13th in 14 games overall. Miles Wood scored his 15th goal for the Devils, and Jack Hughes got his 11th.

Mackenzie Blackwood made 36 saves for the Devils after missing the previous two games with an upper-body injury. He is winless in his last nine starts since March 30.

Carter opened the scoring at 9:41 of the first period. The puck rolled off Jason Zucker’s stick and went to Carter, who beat Blackwood to the blocker side from the right faceoff dot.

McCann scored his team-leading seventh power-play goal 3:09 after Carter’s goal. McCann nearly shouldered the right post as he dove and converted a point-shot rebound over Blackwood’s pad. It was McCann's 13th goal overall.

Hughes made it a 3-1 game at 8:45 of the second. The puck slipped off Yegor Sharangovich’s stick and went to Hughes, who beat an out-of-position DeSmith.

Wood pulled the Devils within a goal 10:58 into the third period. DeSmith committed to the initial shot from Ryan Murray, but he slid a pass to Wood, who scored on a one-timer. Damon Severson’s assist tied Ken Daneyko for seventh in Devils history for points by a defenceman.

Crosby’s late goal also locked in his 16th season averaging at least a point a game.

Crosby, who has 55 points in 47 games, joins Wayne Gretzky as the only players in NHL history to have a point-per-game season in each of their first 16 years in the league. Gordie Howe averaged a point-per-game in 17 seasons total, one more than Crosby.

Crosby has nine goals and 26 points in 19 games without Malkin in the lineup this season.

Malkin wore a no-contact jersey a day earlier when he joined the team at practice for the first time since suffering a lower-body injury on March 16.

Devils centre Janne Kuokkanen missed Saturday’s game after injuring his hand blocking a shot on Thursday. Defenceman Jonas Siegenthaler also did not play because he was added to the COVID-19 protocol list.

Devils: Visit Philadelphia on Sunday for the first of four games against the Flyers.