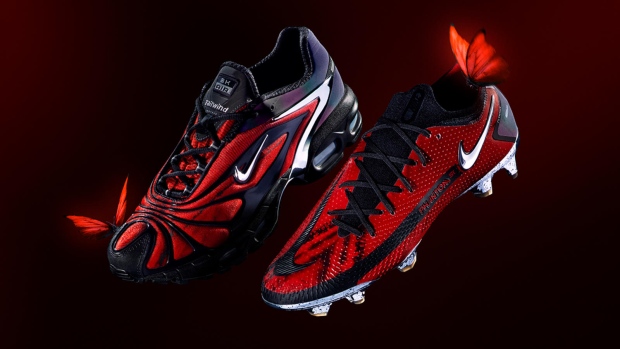 The British grime rapper Skepta is collaborating with Nike on a new collection of shoes, including the Nike Air Max Tailwind V sneaker as well as the SB Phantom football cleat.

The sneaker and the cleat will share the same ‘Bloody Chrome’ colourway in black and red with silver accents. Both silhouettes contain a nod to the cover of Skepta’s 2019 album Ignorance is Bliss with iridescent panels on the heel.

In official photos from Nike, the sneaker and the cleat are modeled by the British rapper Dave.

With his own version of the SB Phantom, Skepta will become the first artist to have his own football cleat with Nike. The artist previously released a ‘Chrome Blue’ version of the Air Max Tailwind V sneaker with Nike in April.