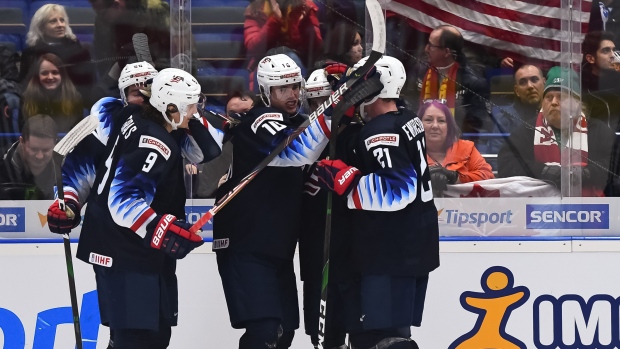 OSTRAVA, Czech Republic — After a loss against Canada to open the tournament, the United States improved to .500 with a 6-3 win over Germany on Friday at the world junior hockey championship.

The Americans erased 1-0 and 3-2 deficits against the Germans (0-1), who earned promotion to the world juniors this year after a four-year absence.

Trevor Zegras added four assists for the Americans, who won silver at the last world juniors in Vancouver.

"We knew it was going to be a tough game and that we'd face some adversity," U.S. head coach Scott Sandelin said. "We kept talking about it, every game in this tournament is hard. That was a good team we played tonight and I'm glad we battled the way we did."

Germany hadn't scored in its last four games against the U.S., at the world juniors.

The Americans are off Saturday, while Germany faces the host Czech Republic.

TRINEC — A late goal by Daniel Tkac helped Slovakia avoid an upset in its tournament opener.

It was the second straight close loss for Kazakhstan, which survived the relegation round last year to earn a berth in this year's tournament. Kazakhstan lost 5-3 to Switzerland on Thursday.

Oliver Okuliar and Robert Dzugan, with an empty-netter, also scored for Slovakia.

Maxim Musorov scored his third goal of the tournament for Kazakhstan.

This report by The Canadian Press was first published Dec. 27, 2019.