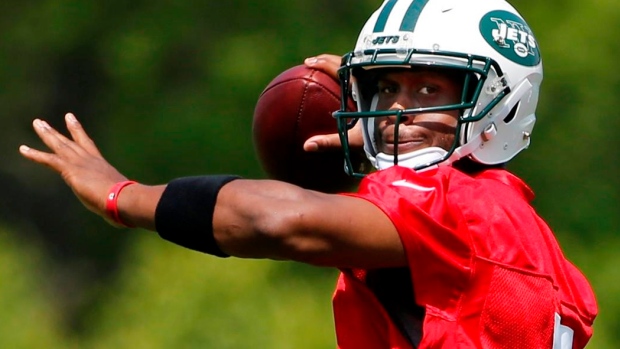 FLORHAM PARK, N.J. — Geno Smith has never doubted himself or lacked confidence in his abilities.

Not when he slid to the second round of the NFL draft in 2013. Not when he struggled through two up-and-down years as the New York Jets' starting quarterback. And certainly not when he was sent to the sideline as a backup last season.

With Ryan Fitzpatrick still unsigned and locked in a contract stalemate with the Jets, Smith is back as the team's starting quarterback. Maybe for just a few more days or weeks. But maybe, depending on what happens with Fitzpatrick, for another season.

"Every player in the NFL, I think, deserves a fair opportunity," Smith said Wednesday after organized team activities. "Whether or not that's the case, who knows? I believe that I do have an opportunity here and I've just got to take advantage of it."

Smith has been all but written off by some fans and media after failing to establish himself as a franchise-type quarterback in his first three seasons. He was on track to be the Jets' starter last summer until a punch from then-teammate Ikemefuna Enemkpali broke his jaw.

Fitzpatrick stepped in, set a franchise record with 31 touchdown passes and led New York within a victory of the playoffs. Meanwhile, Smith was mostly stuck on the sideline — trying to soak in everything he could while waiting for his next opportunity.

"I'm not going to talk about last year," said Smith, speaking for the first time since last season ended. "I'm only focused on the future."

"If anyone has watched football over the years, it's always been a process with quarterbacks," Smith said. "Every single quarterback has a different learning curve. Some come right in and blow it away. Some come in and struggle a little bit and then they get it. For me, my confidence has always been there. I think the knowledge of the game, execution, having the game slow down for me, is something that will continue to grow."

The Jets have had just two sessions of OTAs, but Gailey has seen improvement in Smith during this early portion of the off-season.

"He's come along and he's made good progress," Gailey said. "He's doing some good things in all aspects: Mentally, physically, decision-making, all of that. Mentally, he's ahead of where he was (last year)."

Smith added: "I'm still trying to learn as much as I can. The day that I stop learning will probably be the day I think too highly of myself."

There's still a good deal of uncertainty, though, about Smith's future, for this season and beyond.

If Fitzpatrick re-signs, coach Todd Bowles has said he will reassume the role as the No. 1 quarterback. That would push Smith back to No. 2, with Bryce Petty, the Jets' fourth-round pick last year, and Christian Hackenberg, a second-rounder this year, also on the roster.

Bowles reiterated that carrying four quarterbacks into the regular season is a possibility.

The Jets are also waiting to see how the situation with Fitzpatrick plays out. Both sides have said they want to be reunited, but haven't been able to agree on contract numbers. Wide receivers Brandon Marshall and Eric Decker — both of whom have not yet participated in the voluntary OTAs — have publicly lobbied for the team to bring back Fitzpatrick.

Smith has heard it all and insists he not focusing on any of that.

"I think they've always been supportive of myself as well," Smith said. "I don't want to speak on anyone else's statements, but It doesn't rub me the wrong way at all."

But with Fitzpatrick not around, Smith is getting an opportunity to get more snaps with the starters. Smith was asked if he, indeed, wants Fitzpatrick to return — considering what that would mean to his own situation.

"That's up to the front office and Ryan Fitzpatrick," Smith said. "Why would I speak on that? Come on, man."

As for Fitzpatrick, the Jets haven't set any deadline to get a deal done. Bowles reiterated that he's "hopeful" the veteran will be back, adding that he doesn't seek regular updates from Maccagnan on the situation.

"Just tell me when it's done," Bowles tells the GM.

Until then, Smith is the guy — for however long that lasts.

"Everyone's goal is to be a starter, All-Pro player, ultimately a Hall of Famer," Smith said. "That should be your goal. We've got a long ways to go as a team. We've got to keep working and it's only the beginning of the process."