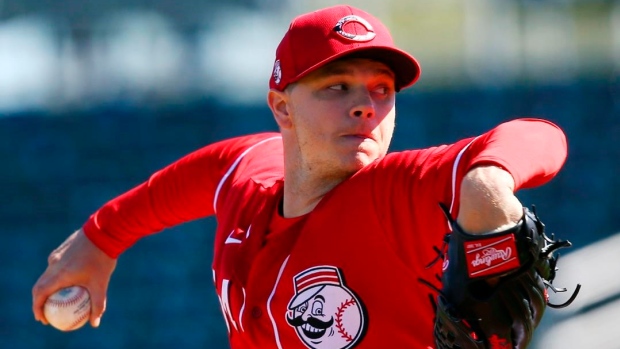 GOODYEAR, Ariz. — Sonny Gray had an All-Star season despite soreness in his throwing elbow. Surgery has left him pain-free heading into his second season with the Cincinnati Reds.

The right-hander pitched with bone chips all season but managed to make 31 starts. He had the bone chips removed after the season.

“It was hard to think that he wasn't completely healthy last year, based on the kind of year he had,” manager David Bell said. “He's definitely confident coming off of last season. It's just a mindset knowing that he's healthy and you had something taken out of his elbow. It has freed him up even more not only with mechanics but his mentality.”

Cincinnati aquired him from the New York Yankees and Gray agreed to a contract that added $30.5 million from 2020-22 and includes a 2023 club option.

Gray and Houston's Justin Verlander were the only pitchers in the majors to make at least 30 starts and allow no more than four runs in any of them.

It took him about six weeks to recover from surgery.

“They told me I could start throwing in six weeks, but it was weird for a little while,” Gray said. "It got super swollen. I was doing physical therapy for awhile but I started throwing way early, three or four times a week. Six weeks after the season, I felt good.”

His first test came this week when he pitched two innings of a spring training game against Oakland. He allowed two hits and threw without problem.

“I was trying to throw my fastball and just rip it the whole time," Gray said. “I checked a lot of boxes. I got my mind right.”

Castillo and Gray will anchor a rotation that includes Trevor Bauer, left-hander Wade Miley and Anthony DeSclafani. The pitchers also should get a boost from Cincinnati's off-season makeover that added second baseman Mike Moustakas and outfielders Nick Castellanos and Shogo Akiyama.

The Reds think they have enough starting pitching and offence to contend in the NL Central after six losing seasons.

“We're reinforcing each other with a little bit of pressure in a good way, a friendly competition way,” Gray said.

Notes: 3B Eugenio Suárez and OF Nick Senzel are still limited as they recover from shoulder surgery. Suárez had surgery on Jan. 29 to repair torn cartilage in his throwing shoulder. He can't swing a bat with both hands or throw, but he's taking ground balls. Senzel had surgery for a torn labrum in September and is playing catch. SS Freddy Galvis has a sore shoulder and won't play until next week.