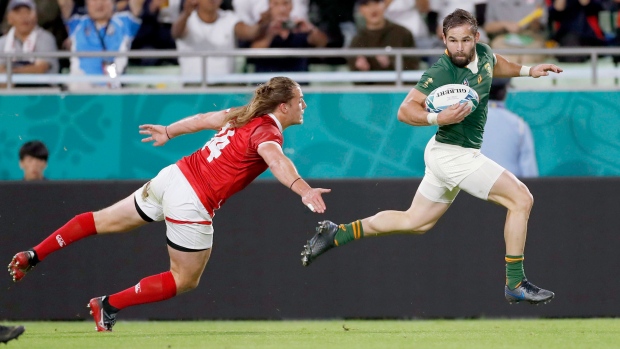 The Springboks scored 10 tries and had four tries and a bonus point in a whirlwind first 17 minutes at Kobe Misaki Stadium to run the Canadians off their feet.

Canada was already 40-0 down when replacement lock Josh Larsen was the sixth man sent off at the tournament, this time for a shoulder charge to the neck of South Africa's Thomas du Toit at a ruck just before halftime.

Strangely, facing what threatened to be the biggest beating of the World Cup so far, the red card seemed to lift Canada for a period.

The Canadians were conceding far worse than a point a minute for the first 30 minutes and 47-0 behind at halftime. But they scored their one try early in the second half when it was 14 vs. 15. They also kept the Springboks scoreless for 15 minutes after the break while a man down.

Scrumhalf Cobus Reinach had a hat trick in the opening 20 minutes. The Boks added just three tries in the second to their seven tries in the first half, underlining the gutsy work by Canada after losing Larsen.

The biggest cheer was for Canada flanker Matt Heaton when he drove over in the 45th to make his first test try one against the two-time World Cup champions.

South Africa would only be denied a place in the quarterfinals if Italy beats defending champion New Zealand by a huge margin in their final Pool B game, and both teams also get a bonus point in the process. Italy has never beaten New Zealand, let alone by the 100-plus points required to keep the Springboks out of their seventh quarterfinals in seven attempts.

South Africa's backs ran riot in the first half in Kobe with the first seven of the Springboks scores and eight of the 10 coming through the backline.

Veteran hooker Schalk Brits and prop Frans Malherbe, who ground over for the last try in the 73rd minute, were the only forwards to score.

South Africa's first try through centre Damian de Allende arrived in the third minute. The two-time champions had their bonus-point fourth try in 17 minutes. It was 40-0 after 29 minutes.

Reinach's third was the pick of the tries. Elton Jantjies dropped a crosskick over Canada's backline from inside his 22, wing Warrick Gelant caught it and broke, and fed de Allende who found Reinach to finish between the posts.

Canada had one good attack in the half and the fans roared them on. But wing DTH van der Merwe couldn't hold on to a crosskick in the corner when a try was up for grabs. Van der Merwe also spilled a chance late in the second half which could have made him just the fifth player to score a try in four World Cups.