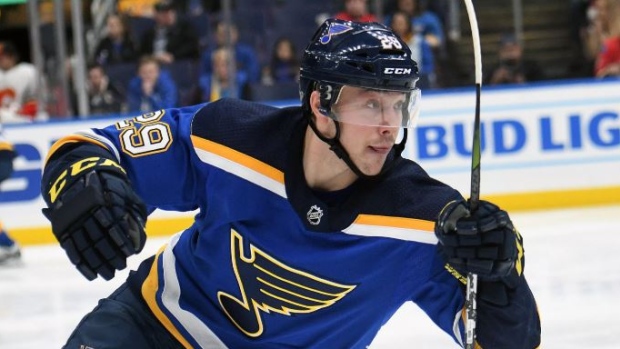 Vince Dunn's time with the St. Louis Blues may be coming to an end.

According to TSN Senior Hockey Reporter Frank Seravalli, the Blues have held trade conversations on the 24-year-old, who signed a one-year, $1.875 million deal ahead of training camp.

"Not inevitable, but it certainly seems possible given Blues head coach Craig Berube's comments and the fact that Dunn is expected to be a healthy scratch for the Blues tonight," Seravalli said Tuesday evening on Insider Trading. "I’m told the Blues have engaged with teams on conversations about Dunn. Many thought that he might have been traded in training camp; alas, he has started the season with the Blues, but pardon the pun, his time may be ‘Dunn’ in St. Louis."

Dunn was indeed scratched from Tuesday's 5-4 overtime win over the Vegas Golden Knights after being called out by Berube postgame after Sunday's loss to the Los Angeles Kings.

"Gotta play better. Can't get walked one-on-one," Berube said after Kings forward Carl Grundstrom got past Dunn to score. "We'll keep that in-house talking about it."

A second-round pick of the Blues in 2015, Dunn has one goal and two points while averaging 16:32 of ice time in six games this season.