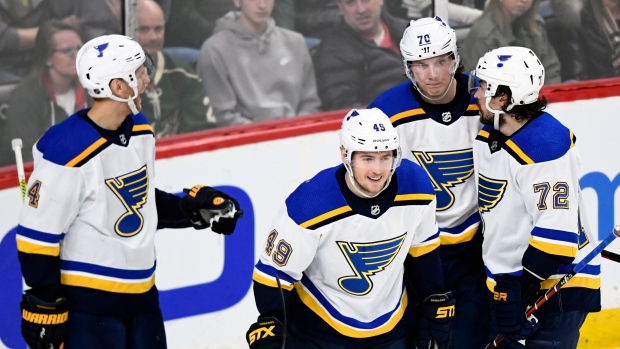 ST. PAUL, Minn. — Oskar Sundqvist had a goal and an assist, Jordan Binnington made 32 saves and the St. Louis Blues beat the Minnesota Wild 4-1 Sunday.

Jordan Kyrou, Brayden Schenn and Ivan Barbashev also scored for the Blues, who have won four straight and remained atop the Western Conference standings.

“I thought we capitalized on our opportunities,” Blues coach Craig Berube said. “We didn't look like we had our legs under us the whole game really.”

Marcus Foligno scored and Devan Dubnyk stopped 22 shots for Minnesota, which ended a two-game winning streak. The Wild are three points out of the final playoff spot in the West going into Monday's trade deadline.

“We are still in it,” Foligno said. “We still have 20-something games left or 20 games left. Just because of the trade deadline tomorrow, there's still the common goal of making the playoffs.”

St. Louis has given up just two goals over the last four games and shut down Minnesota on four power-play chances. The defence even created offence as the Blues put the game away with a short-handed goal early in the third period when Sundqvist and Barbashev converted a give-and-go on a 2-on-1 rush, with Barbashev beating Dubnyk from the slot to make it 4-1.

“I thought we did a good job pushing,” Dubnyk said. “That’s the danger. You push, push, push, and it just takes one bounce to create odd-man rushes.”

The Blues struck twice in the first period, getting on the board with Kyrou’s goal just over 11 minutes in. Dubnyk denied Marco Scandella from the high slot, but the rebound kicked to his left and Kyrou swatted it in from a tight angle.

Later in the first, Jaden Schwartz gathered a loose puck just inside the Minnesota blue line and fed it to Schenn, whose wrist shot from the right faceoff circle beat Dubnyk for his 21st goal of the season.

Schwartz fell forward as he made the pass to Schenn, and while his teammates celebrated the goal, Schwartz remained prone on the ice. After a visit from the trainer, he got to his feet, picked up what appeared to be some teeth, skated off the ice and headed straight to the St. Louis locker room. He returned in the second period.

Minnesota cut the lead to 2-1 early in the second on Foligno’s 10th goal of the season. Standing at the right post, Foligno tried to jam the puck past Binnington. Instead, it popped high in the air, hit Binnington in the back and rolled into the net.

The goal was initially disallowed, as it appeared Foligno hit the puck with a high stick as he swatted at the rebound, but replay showed that Foligno’s stick didn’t make contact.

Sundqvist restored the Blues’ two-goal lead midway through the second when he pounced on a Minnesota giveaway deep in its own zone and beat Dubnyk with a wrist shot.

"I got kind of a lucky bounce there," Sundqvist said. "I got a stick on it (and) kind of got left by myself with the goalie, but they were at the moment in the game where they were pressuring hard and getting us hemmed in our zone. It was an important goal for sure."

NOTES: The Wild announced the Blues will be their opponent when Minnesota hosts the Winter Classic on Jan. 1, 2021, at Target Field in Minneapolis. ... Blues C Tyler Bozak missed his second straight game with a lower-body injury, but St. Louis did get D Alex Pietrangelo back after a one-game absence due to illness.