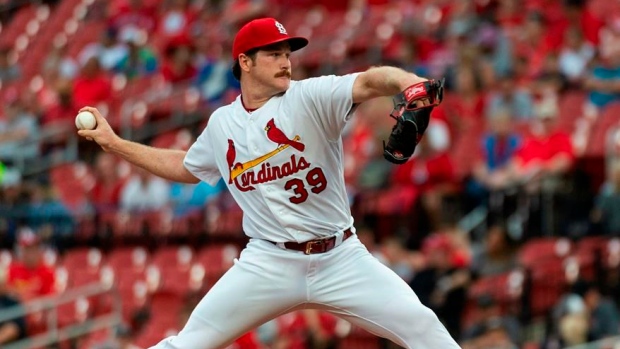 JUPITER, Fla. — St. Louis Cardinals pitcher Miles Mikolas was scratched from his second bullpen session of the spring because of a flexor tendon issue.

“Best-case scenario is probably just a couple more days before he starts playing catch, starts his bullpens again,” Cardinals manager Mike Shildt said. “I can't say that's going to happen one way or the other.”

Mikolas said his arm felt “tender from time to time” last season, but he was able to manage it.

“I do not know what the full clinical term is,” Mikolas said. “I can tell you my elbow is a little sore.”

Shildt said the Cardinals hope to have a more concrete time frame for Mikolas return to the mound in a day or two.

“Is he behind? Yeah, he's behind,” Shildt said. “He's not being able to get on the mound, but he's still doing some of the things mentally and physically that he can do.”

Should Mikolas only need a couple of more days of rest, he expects a brief layoff wouldn't significantly hamper his preparation for the season.

“I've already been throwing and throwing bullpens,” Mikolas said. “Once I feel good and get cleared to re-ramp back up, it shouldn't be a super-long process.”

Mikolas signed with St. Louis prior to the 2018 season following a successful stint in Japan. He was 18-4 with a 2.83 ERA during his first season with the Cardinals and earned a trip to the All-Star Game.

Mikolis received a platelet-rich plasma injection as treatment for his arm soreness after the Cardinals were eliminated from the playoffs.

“It's been a long couple of seasons for me,” Mikolis said.

Despite last season's struggles, Mikolas entered this spring as one of four pitchers expected to be in the Cardinals rotation, joining Jack Flaherty, Dakota Hudson and Adam Wainwright.

Carlos Martinez, Korean off-season signee Kwang-Hyun Kim, Alex Reyes and Daniel Ponce de Leon entered camp as the leading candidates for the fifth starting spot. An extended layoff for Mikolas could allow two of those pitchers to break camp in the starting rotation.