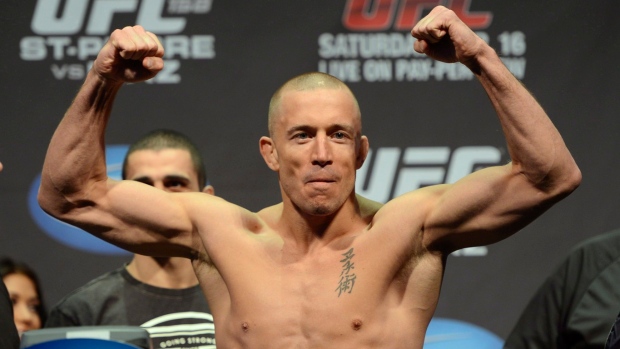 The two will meet for the 185-pound crown in the second half of 2017, Dana White announced on TSN's SportsCentre.

White also indicated that he expects the fight to take place in Las Vegas rather than in Canada where GSP defended the welterweight belt four times.

"I still consider him a champion," Dana White told TSN's Rod Smith on SportsCentre.  "Michael Bisping has wanted this fight, GSP wants this fight, so I'm going to make it happen."

The 35-year-old St-Pierre has not fought since November 2013 when he won a narrow decision over Johny (Bigg Rigg) Hendricks for his 12th straight win. The Montreal mixed martial arts star then took a hiatus, saying he needed time away from the sport.

"As far as the Under Armour/Reebok thing goes, he was sponsored by Under Armour when he was in the UFC before and never wore it into the Ocatgon so, it wasn't that tough to get done," said White.

England's Bisping won the middleweight championship from Luke Rockhold at UFC 199 in January 2016, subsequently defending the title against Dan Henderson.

St-Pierre's previous UFC fights were all at 170 pounds.

The two fighters are slated to appear at a news conference Friday in Las Vegas prior to the UFC 209 weigh-ins.

For the UFC, St-Pierre versus Bisping is a welcome marquee fight at a time when lightweight champion (The Notorious) Conor McGregror is awaiting the birth of his child, former light-heavyweight title-holder Jon (Bones) Jones is trying to sort out his life outside the cage and former women's flag-bearer (Rowdy) Ronda Rousey is contemplating her fighting future after beatdowns at the hands of Holly Holm and Amanda Nunes.

St-Pierre was a pay-per-view heavyweight for the UFC at the time of his departure from the sport. He kept training during his time away and had to undergo knee surgery after a practice injury.

The Canadian was known for his elite cardio and ample toolbox, equally able to strike or wrestle.

His popularity is shown by the fact that, despite his time away from the sport, he has 1.54 million Twitter followers. Current welterweight champion Tyron (The Chosen One) Woodley has 132,000.

Bisping is a sharp-tongued Brit who won Season 3 of "The Ultimate Fighter" reality TV show. A former light-heavyweight who dropped down to middleweight, his career has been on the upswing in recent years.

A well-conditioned fighter who can pepper opponents with punches, Bisping has won his last five bouts including a victory over middleweight icon Anderson Silva.