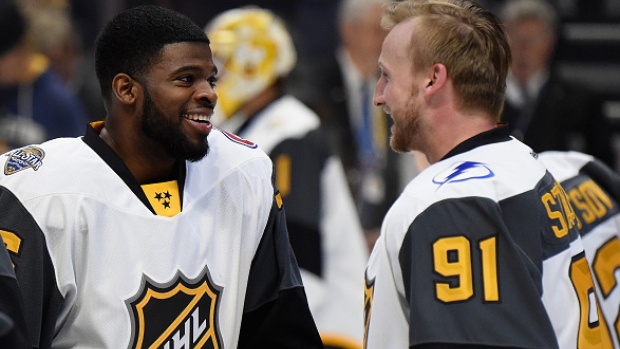 Stamkos was voted by fans as captain of the Atlantic Division team for the All-Star 3-on-3 tournament that'll take place later this month at Amalie Arena in Tampa, Florida. The league unveiled All-Star captains Wednesday night and is expected to announce the full rosters in mid-January.

Stamkos has 49 points for first-place Tampa Bay and is signed for the next seven seasons. Stamkos was the No. 1 pick of the Lightning in 2008 and chose to stay with them rather than test free agency in the summer of 2016.

Though every team must be represented, the Lightning could have two more All-Stars in winger Nikita Kucherov and goaltender Andrei Vasilevskiy. Kucherov leads the league with 56 points, and Vasilevsky has the most wins of any goalie with 26.

Washington Capitals winger Alex Ovechkin earned his ninth career All-Star nod as the fan-voted captain of the Metropolitan Division. Ovechkin leads the league with 26 goals, just ahead of Kucherov, and is on pace for his eighth 50-goal season.

After helping the Predators reach the Stanley Cup Final last spring, Subban is tied for third among defencemen with 29 points. McDavid is ninth in the league with 45 points despite the Oilers' struggles.

This is a corrected story. A previous version indicated this was Alex Ovechkin's 12th All-Star selection. It is his ninth.