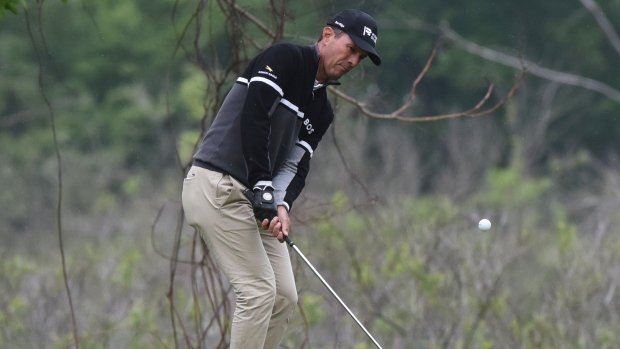 Stephen Ames and Mike Weir are both heading into Sunday with a great opportunity to win their first senior major championship.

The two Canadians sit first and tied for second respectively with one round left in the KitchenAid Senior PGA Championship after both players fired rounds of 67 at the Harbor Shores Resort Course in Benton, Mich.

Ames leads the tournament by two shots while Weir is tied with Bernhard Langer.

“I enjoyed the way I played, the way I handled myself,” said Ames. “Second, I hit the ball right where I was looking at it all day, which was -- that helps, obviously. And again, I made some nice putts, which is obviously a key to shooting a good round on a major.”

Ames made five birdies on his day against just a single bogey. He was forced to scramble somewhat on his back nine in the windy conditions. On the 14th, his approach shot found some deep rough beside the green and it appeared he may have trouble just getting onto the putting surface. But a chop with a wedge delivered the ball to within two feet of the pin and he dropped that to save par.

On the par-5 15th, his tee shot sailed right and ended up behind a small bush. He managed to hack the ball back into play and then hit a silky iron to the green and two putted for a par.

As it has for much of the tournament, Ames’ putter was again reliable as he rolled in a number of lengthy birdie putts and added some no-stress two-putt pars to his round.

Now he heads into Sunday as the leader, being chased by the rest of the pack

“I don't like being the guy, period,” he said of his position on the leaderboard. “It doesn't matter. Either way I look at it, I'm going to go out there and play my own game. I can't control what anybody else is doing. The only thing I can control is myself, so I'm going to try and keep my emotions the way they are right now and play golf, and if it comes out, it comes out.”

Weir would have shared top spot with Ames if not for an unfortunate bounce on the 17th hole. His tee shot appeared headed for a greenside bunker right of the putting surface but hit a rake and bounded into a boggy area. He tried once to extract his shot but ended up settling for a double bogey. A bounce-back birdie on the 18th lessened the pain of that score.

“Yeah, that was an unfortunate bounce,” said Weir. “I thought it was just going to be in the bunker and that tested me a little bit there. I made a nice putt from about eight feet and stood up there and hit a great drive and 8-iron to close range on 18, so good way to finish. All in all it was a really good day. I played really well. I over drew that shot on 17. But you know, played really nice golf today.”

Weir’s day included seven birdies along with a bogey and the double off the rake.

The two Canadian flags at the top of the leaderboard was a nice sight for both players, who finished one-two at the Principal Charity Classic last June, when Ames notched his second PGA Tour Champions victory. They’ll play together in the final group on Sunday.

Weir was quick to praised his countryman on his strong season so far.

“We played a lot of golf together,” stated Weir. “He's at the top of the leaderboard, all us guys chasing and he's been playing some great golf this year. He's been playing really good, really well and he's continued that this week. We've all had our hands full to try to catch him. That's always been kept in his game, ball-striking. All aspects he does well.”

Langer, who also posted a 67 on Saturday, has 43 PGA Tour champions wins to his credit, including 11 majors.