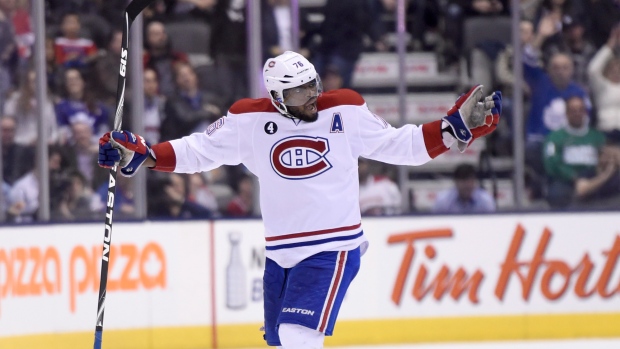 Subban, 26, has been working out with Johnson for the past month at a track and field complex in Toronto. Johnson said in an interview that he began working with Subban after he was contacted by one of Subban’s family members.

"We started working together three times a week, but we’ve gone down to two a week,” Johnson told TSN. “I don’t want to overload his muscles. He’s doing strength and acceleration and some agility. He’s going to be even better, even faster next year.”

Johnson declined to say how much Subban is paying him. The former sprinter, who has mostly disappeared from the public eye in recent years, said he has worked with other pro athletes as a trainer including former Florida Panthers forward Anthony Stewart.

Subban, a two-time NHL first team all-star, declined to be interviewed about his training. His agent, Don Meehan, confirmed the working relationship to TSN.

"As you know, P.K. has no problem being in front of the camera, but I think he's worried about protecting Johnson [from media scrutiny]," Meehan said. "I didn't even know they were working together until you told me."

Most of the training with Subban takes place on the track, Johnson said.

“Running is a fundamental,” Johnson said. "If you can’t run, you can’t play the game, even if it’s on the ice.”

Johnson won the gold medal for Canada in the 100 metres at the 1988 Olympics in Seoul, but was later stripped of the medal after testing positive for steroids. In 1991, after Johnson’s suspension finished, he attempted a track comeback but never regained his form, failing to qualify for the 100-metre final at the Barcelona Olympics.

Two years later, in 1993, Johnson won the 50 metres at a track meet in France. He completed the race in 5.65 seconds, 0.04 seconds off the world record.  Johnson tested positive for excess testosterone, and was banned for life by the International Amateur Athletics Federation (IAAF), prompting then-Canadian amateur sports minister Pierre Cadieux to call Johnson a national disgrace.

Thanks to technical errors when he was assessed his lifetime ban, Johnson again returned to the track in 1999 and ran 11.0 seconds in the 100-metres. Later that year he failed a drug test, testing positive for a diuretic that can be used to hide the presence of other performance-enhancing drugs.