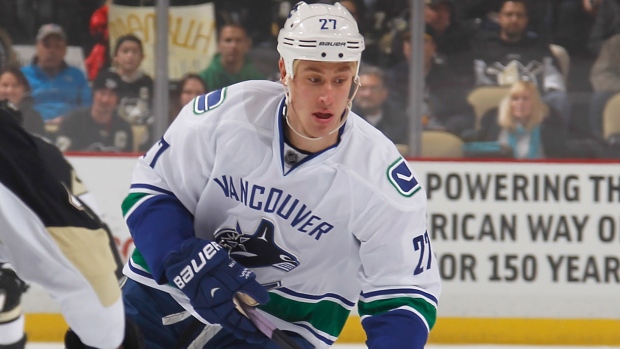 Colby Robak, who as acquired in a deal with with Floriada Panthers for Jesse Blacker, will make his debut today against the Winnipeg Jets. - Eric Stephens, Orange County Register

Carolina Hurricanes center Jordan Staal took a major stride Saturday in his recovery from a broken leg, getting in his first skate since the injury.Staal, dressed out in full hockey gear, did some light skating on his own after the Canes’ practice at Raleigh Center Ice. He said it was his first time on the ice since the Sept. 23 injury against the Buffalo Sabres. – News Observer

The team has recalled winger Chris Terry from the AHL. - Team Website

Cam Ward gets the nod in net today against the Red Wings. He is 8-8-1 with a 2.48 goals-against-average and a .912 save percentage. - Mike Maniscalco

Head coach Joel Quenneville said winger Patrick Sharp likely will return when the Hawks face the Devils on Tuesday night in New Jersey. Sharp missed his 14th consecutive game for the Hawks on Saturday with a right knee injury suffered Nov. 4 against the Canadiens. The veteran traveled with the Hawks and skated Saturday morning. Quenneville said there's "a good chance (Sharp) is going to play on that trip and likely … the first game." – Chicago Tribune

Valuable forward Jamie McGinn, who can play on any line, will undergo back surgery Wednesday and could be lost for the season, Avs coach Patrick Roy said. McGinn has missed the past eight games with the same back injury that forced his absence throughout training camp and preseason. Roy said doctors won't know if McGinn requires a short-term or long-term repair until the surgery is performed. – Denver Post

Petr Mrazek will start in goal for the Red Wings tonight against the Hurricanes, He sports a 2-0-0 record with a 3.36 goals-against-average and a .875 save percentage. - Ansar Khan, MLive.com

Marian Gaborik took part in practice today and is close to returning from an upper-body injury that has kept him sidelined for the past four games. - lakingsinsider.com

Captain Mikko Koivu missed practiced with what head coach Mike Yeo called a “very, very minor strain” and he’s expected to practice Monday. Koivu was around doing an off-ice workout and it doesn’t appear to be anything serious. Ryan Suter practiced. The hope is he can practice Monday and return Tuesday against the Islanders. – Star Tribune

The team has sent Drayson Bowman down to Hamilton of the AHL. The forward had no points in three games. - Team Twitter

Michael Bournival has been recalled from his conditioning stint in Hamilton. The forward has missed 15 games with a shoulder injury. - Team Twitter

The Devils have assigned struggling winger Damien Brunner to Albany of the AHL and have recalled defenceman Peter Harrold. - Team Twitter

Winger Mike Cammalleri will not travel to Carolina for New Jersey's game tomorrow against the Hurricanes due to a lower-body injury. Forward Patrick Elias also won't be making the trip due to a groin injury. - Tom Gulitti, The Record

Lubomir Visnovsky (upper body), out since Nov. 29, appears on target to come off IR before Tuesday's game against the Minnesota Wild.

Casey Cizikas left Saturday's game in the third period with an undisclosed injury. He appeared to take Vladimir Tarasenko's stick to the face after Thomas Hickey leveled Tarasenko with a clean hit. – Newsday

Goaltender Craig Anderson will get the start this evening against the Vancouver Canucks. Anderson is 5-7-4 with a 2.47 goals-against-average and a .929 save percentage.

Milan Michalek, who is suffering from an upper-body injury, will not be in the lineup for the Senators this evening. He will be replaced by Mark Stone, who is coming off a foot injury. - Team Twitter

Jared Cowen might be a healthy scratch for the third-straight game. The defenceman has struggled this season, and with others bodies such as Marc Methot returning to the lineup, Cowen need to step up his game. - Ottawa Citizen

Alexander Steen took part in the Blues’ pregame warm-up Saturday, but was later scratched from the game due to a lower-body injury that happened Thursday in Nashville. He is considered day to day.

Blues goalie Brian Elliott, who is out week to week with a sprained right knee, will remain off the ice for the time being after feeling sore following an on-ice practice in Chicago.

Mike Green has been skating with his teammates. He is targeting Tuesday night’s game in Tampa for his return. – Comcast Sportsnet.com

The Capitals have assigned centre Liam O'Brien to the AHL. - capitalstoday.com

Ondrej Pavelec will get his turn in goal for Winnipeg, Sunday, after Michael Hutchinson recorded the win over the Avalanche. – Team Twitter

The Canucks lost red-hot winger Shawn Matthias, who did not return from a blatant elbow-to-the-head by Leafs’ defenceman Stephane Robidas late in the second period. – Vancouver Sun

The team has assigned Tom Sestito to Utica of the AHL on a conditioning assignment. He has been sidelined with a leg injury. - Team Release

Eddie Lack gets the call in net tonight against the Ottawa Senators. He stopped all 13 shots he saw last night in relief of Ryan Miller. - Team Twitter