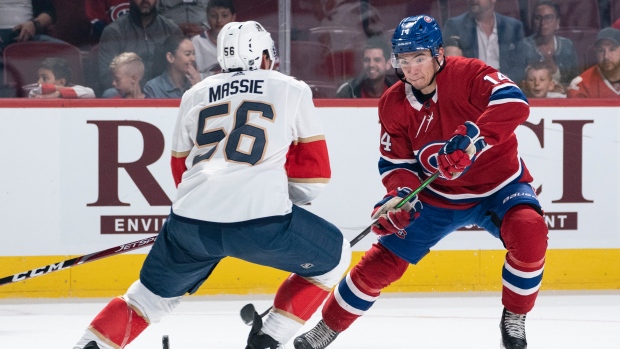 The first two-plus years of the Vegas Golden Knights franchise have been, in one word, surreal.

They cleaned up during the 2017 expansion draft, and since then it’s been mostly sunshine and rainbows. George McPhee, Kelly McCrimmon and the rest of the Golden Knights front office have done a masterful job, which is one of the reasons why the team is again a favourite to advance out of the Western Conference this season.

But even Vegas – a team that’s seemingly done everything right since its inception – has made mistakes. At the top of that list is the Tomas Tatar trade. Vegas acquired him for three draft picks (a first-round pick in 2018, a second-round pick in 2019 and a third-round pick in 2021) during their first playoff push in the 2017-18 season, but he never assimilated himself into the lineup and was eventually shuffled into healthy scratch territory.

Those misfires will happen from time to time, but it surely has haunted Vegas that Tatar has felt exceptionally comfortable in his new home in Montreal. Tatar became part of one of the league’s most dominant lines last year, playing alongside Philip Danault and Brendan Gallagher. The unit territorially dominated games for most of the 2018-19 season and Tatar ended the year with his best scoring season of his career, racking up 25 goals and 33 assists.

Of course, Tatar wasn’t traded for nothing. Montreal, in a bind with longtime winger Max Pacioretty, flipped him to Vegas in September of 2018. And for at least the first year, the trade felt like a win-win. Pacioretty helped Vegas form perhaps the best second line in the entire league, playing predominantly with Paul Stastny and Mark Stone. Pacioretty had 22 goals and 18 assists in an injury-shortened season, and then added five goals and six assists during their first-round series against San Jose.

But a new wrinkle has emerged. The third piece of last year’s trade was forward prospect Nick Suzuki, Vegas’ first-round pick (13th overall) in the 2017 NHL Draft. Suzuki spent most of last year dominating the OHL with Owen Sound and Guelph, and seemed on the cusp of winning an NHL job. Montreal has consequently spent most of the preseason trying to get as many minutes out of Suzuki as possible, testing the 20-year-old to see if he is truly NHL ready.

Early returns have been encouraging. Montreal has played Suzuki with expected NHL regulars – he’s already played about 27 minutes with Jordan Weal, but has rotated in with Phillip Danault, Charles Hudon, and Tatar as well. In his 50 preseason minutes, he’s already delivered 15 shots at the net, three assists, and a highlight-reel shootout goal.

The underlying numbers have been the real story, though. Remember how much of a pain Montreal was to play against last season? They offset a lot of their talent deficiencies – notably a lack of shooting talent – by dominating the puck through relentless forechecking and a return to the speed and transition game that made them such a monster in the earlier parts of the decade.

Suzuki has fit in seamlessly. Over the first three preseason games, Montreal has outshot and outchanced their opponents at a nearly 2-to-1 ratio with Suzuki on the ice. 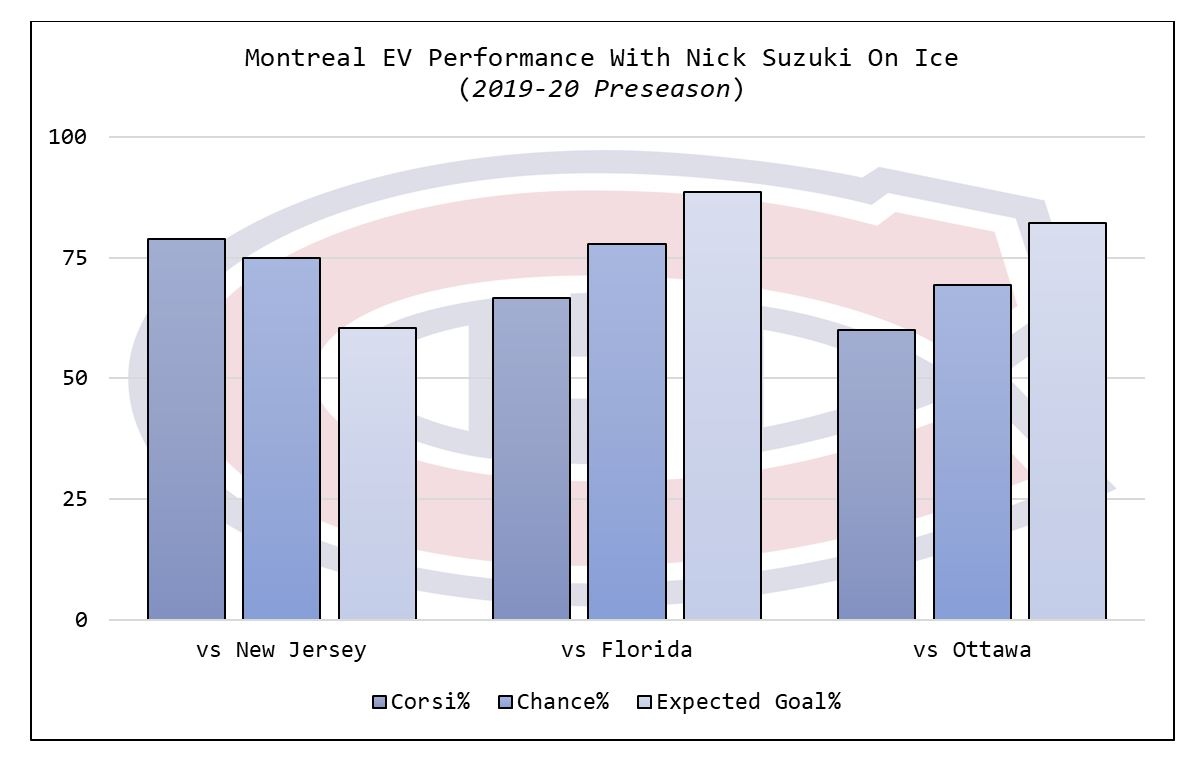 Yes, you can qualify some of this by merely denoting that this is just a three-game sample in the preseason where games can be sloppy, low energy, slow paced, and the like. But for teams with limited opportunities to watch their players compete against the best professional talents in the world, performance in these games is critical. It’s another data point that helps foster confidence in the player and his transition from developmental territory to the highest level of professional competition.

Suzuki was always going to be a factor as part of this trade, but if he’s going to be another cog in an increasingly competent lineup under the watch of head coach Claude Julien, Montreal could have the inside edge on a playoff spot come April. Remember, this is a returning 96-point team that was probably one mediocre power-play unit from making the postseason in 2018-19.

Can a player like Suzuki help put the Canadiens over the top? If he’s remotely as good as what we have seen this preseason, the answer may be yes.

It’s a lot of pressure for a 20-year-old, but that’s what the NHL is all about.