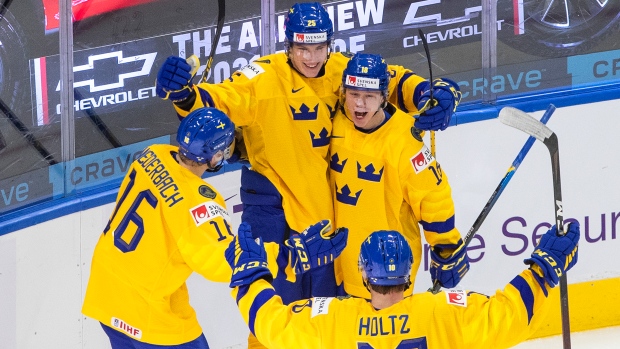 The 2021 IIHF World Junior Championship continues from the bubble on Monday with two games on the docket. Sweden, Austria, Slovakia, Germany all see action.

All of the games can be seen on TSN and streaming on TSN.ca, the TSN App and TSN Direct.

If you thought Team Canada's 16-2 victory over Team Germany was a lopsided contest, we could be in for another doozy as the top-flight Swedes take on Austria.

Sweden opened their tournament with a 7-1 victory over the Czech Republic on Friday. They extended their winning streak in preliminary games at the World Juniors to 53 and are heavy favourites to extend that streak to 54 games after taking on Austria, who fell to Team USA 11-0. Austria is playing in their first World Juniors since 2010.

Group 'B' is deep and goal differential could become a determining factor. The Czech Republic upset the Russians 2-0 during their Group 'B' matchup in Sunday's game. Don't expect Sweden to show Austria any mercy.

Slovakia was a fairly upbeat group when addressing the media following their 3-1 loss to Team Canada on Sunday. They were happy about their ability to shut down the Canadians defensively and got solid goaltending from Samuel Hlavaj, who will likely see more games as the team's starter.

Team Germany, who played with just 16 players (14 skaters and two goaltenders), will get three additional players for the game after the IIHF reported no new positive COVID-19 cases. The fresh bodies should help Germany put a fight. They are 0-0-0-2 at the tournament thus far.