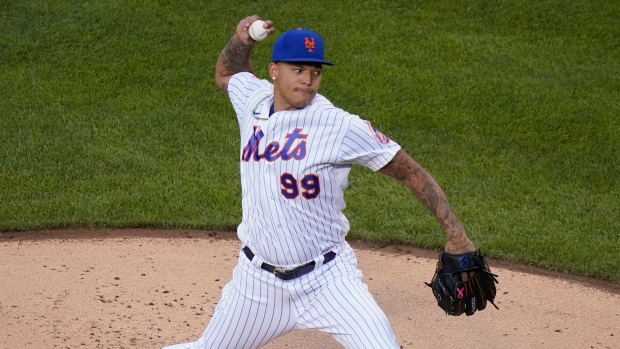 NEW YORK (AP) — When it comes to pitching at Citi Field, Taijuan Walker has an even better record this year than Jacob deGrom.

Walker struck out a career-high 12 and improved to 4-0 in six home starts, leading the New York Mets over the Chicago Cubs 3-2 on Tuesday night. Pete Alonso drove in three runs and center fielder Kevin Pillar and second baseman Luis Guillorme teamed on a thrilling relay to throw out Jake Marisnick at the plate in the ninth inning.

“Today's outing was special, because he's been dealing with a stomach bug for the last couple days. And he actually hadn't been on site consistently,” Mets manager Luis Rojas said. “At the beginning of the game, his body language was kind of weird. He was like low energy, and then the next thing you know, it's the same Walker we see every outing."

Walker signed a $23 million, three-year contract with the Mets as a free agent, joining Marcus Stroman in a rotation headed by deGrom.

Walker (6-2) allowed two runs and five hits in seven innings, walked none for the third time and reached 96.5 mph. Walker had struck out 11 seven times previously, all before he had Tommy John surgery on April 25, 2018.

“The velo going down maybe a little bit because of the surgery helped him develop the other pitches,” Rojas said. “And now the velo's back. ... We hit jackpot with this guy.”

DeGrom had a 0.56 ERA heading into his start against the Cubs on Wednesday night but is just 3-2 in six home starts, plagued by a lack of run support.

Javier Báez put the Cubs ahead 2-0 in the third with his 15th home run, driving a sinker to the opposite field in right-center. Alonso hit a two-run single in the bottom half and a sacrifice fly in the fifth.

Seth Lugo got six outs for his first save since returning on June 2 from elbow surgery, and the Mets (34-25) won for the fifth time in six games to move nine games over .500 for the first time since the end of the 2019 season.

Chicago, tied with Milwaukee for the NL Central lead, lost its second straight to the Mets after winning seven in a row at Citi Field going back to 2018.

Sixteen consecutive batters made out before Willson Contreras’ single with one out in the ninth. Jake Marisnick pinch ran and Eric Sogard singled to right-center. As Pillar ran down the ball and threw toward Guillorme, Cubs third base coach Willie Harris made the questionable decision to send Marisnick. Guillorme caught the ball in short right, made a quick turn and fired a one-hop throw to catcher James McCann. Marisnick made a head-first slide, and McCann tagged him on the left shoulder.

“I always err on the side of aggressiveness,” Cubs manager David Ross said. “I thought that was a really nice relay by Guillorme, almost a blind turn and throw to get our fastest baserunner trying to make something happen there late. I don't have a problem with that, at all.”

“The numbers aren't great this year, but today I really felt like I got out to what I do best,” said Mills, who has a 6.11 ERA.

Cubs star Kris Bryant was hit by a pitch in the first inning and left in the middle of the second with what the team said was a bruised right hand. Bryant initially stayed in the game after he was hit by a first-pitch 93.4 mph sinker, then went to run at first base.

Báez, who missed the prior two starts and five of the previous seven because of a thumb injury, revealed that he switches bats after every home run.

Mets: 2B Jeff McNeil (strained left hamstring) was 1 for 4 with two strikeouts and played second base as he moved up to Triple-A Syracuse from High-A Brooklyn. ... RHP Miguel Castro (neck) threw a partial bullpen.

DeGrom (6-2) takes a 22-inning scoreless streak and a 0.56 ERA, the lowest in major league history through 10 starts, into his outing Wednesday against the Cubs and RHP Robert Stock (0-3, 4.12 at Triple-A), who will be selected from Triple-A Iowa to make his first big league appearance since last September with Boston. DeGrom left his outing Friday against San Diego with right flexor tendinitis.