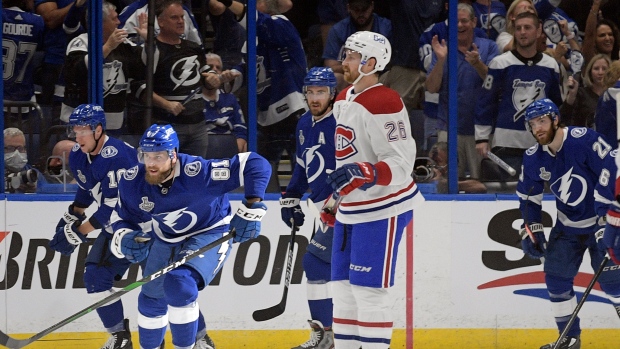 For a few weeks there, the Montreal Canadiens could do no wrong. Then they headed to Tampa Bay for Game 1 of the Stanley Cup final, and a reset quickly followed.

The Canadiens know they are the underdog in this series, not dissimilar to previous meetings this postseason with the Toronto Maple Leafs and Vegas Golden Knights.

Thus, the same rules apply: The Canadiens must win the goaltending battle, they must manage the puck better, and they must convert on the rush and counterattacking opportunities they generate. If the sheer shot volume isn’t going to be there (and it probably won’t be in a series this challenging), opportunistic scoring is critical.

Montreal failed on all fronts in Game 1. The Lightning looked exceptionally comfortable with the puck, and Canadiens’ puck carriers routinely turned the puck over in pressure areas of the ice.

A lot of this you may be able to chalk up to single-game variance. But there was one issue observed in Game 1 that is likely to manifest itself throughout the series: How can the Canadiens slow down multiple scoring lines in Tampa Bay with one bona fide shutdown line, and further, how do you go about that when you do not have last change?

I was eager to see what Lightning head coach Jon Cooper would do to combat the Phillip Danault effect – Montreal’s shutdown centre and, more broadly, the anchor of a line that has already erased the likes of Auston Matthews and Mark Stone in previous matchups.

Here is how Tampa Bay lined up against Montreal in Game 1:

If you are Montreal head coach Dominique Ducharme (or assistant Luke Richardson for that matter), you know you want Danault line to see as much of the Brayden Point line as possible. The combination of Point and Nikita Kucherov may be the most ferocious the league has to offer – Point has 23 points in 19 games this postseason, while Kucherov with a jaw-dropping 30 points over the same interval.

And if you can’t get to them, the Steven Stamkos line is a quality consolation prize. The trio of Stamkos, Alex Killorn, and Anthony Cirelli are actually carrying a better expected goal advantage (+1.0 per-60 minutes) than the team’s top line (+0.5 per-60 minutes), which is rather remarkable. 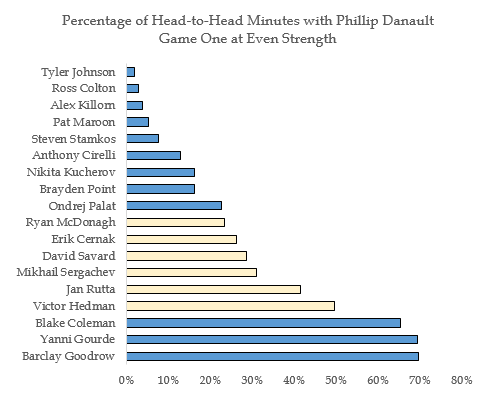 The Lightning were agnostic from a personnel standpoint defensively, and you would expect that against a Danault line (generally also featuring Brendan Gallagher and Artturi Lehkonen) that’s managed to score just three even-strength goals over the course of the postseason. As dominant as this group has been away from the puck, the reality is they haven’t generated much (if any) offence, and I don’t think it’s a surprise the Lightning weren’t afraid of any matchup on that front.

The forward group was noticeably disparate though. The Lightning attacked the Canadiens’ shutdown group through their third line almost exclusively, letting Yanni Gourde’s group get a run against top-tier defensive forwards. That allocation of minutes opened up the door for more favorable matchups down the lineup:

How did those matchups play out? Not particularly well for Montreal. Of specific concern: the kids line in Montreal (the aforementioned Suzuki, winged by Tyler Toffoli and Cole Caufield) were outscored 3-0 by the Point line, and it looked as decisive and one-sided as the score indicated.

This presents Montreal with a second problem: Most of the Canadiens’ opportunistic scoring in previous matchups came from this group, and if they are going to go head-to-head with arguably the most talented offensive line in hockey, they are going to need to generate substantially more offence.

There is no reason to sound the alarm quite yet in Montreal. And most of what you saw in Game 1 you can probably dismiss. But the matchup problem the Lightning pose was on full display, and it’s clear that with last change and the requisite depth in place, the Lightning can engineer very advantageous matchups that other teams could not.

We will keep an eye out for how these matchups shift when the series shifts to the Bell Centre, but right now the Canadiens coaching staff needs answers for Wednesday night.