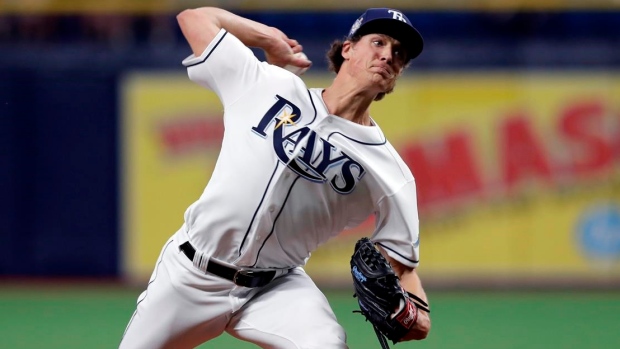 #Rays Glasnow felt discomfort throwing in Oakland on Sunday, underwent MRI which showed right flexor inflammation. Will be shut down from throwing for 3 weeks and then be re-evaluated, That is a big setback given initial thought he'd be ready right after All-Star break,

Glasnow felt discomfort while throwing Sunday in Oakland and underwent an MRI that showed right flexor inflammation. He will be shut down from throwing for three weeks and then re-evaluated.

"That is a big setback given initial thought he'd be ready right after the All-Star Break," tweeted Marc Topkin of the Tampa Bay Times.

After a hot start to the season, Glasnow was placed on the injured list in mid-May and was expected back in four to six weeks.

In eight starts prior to the injury, Glasnow was 6-1 with an earned run average of 1.86 and a WHIP of 0.91. This is his second season in Tampa Bay after coming over from the Pittsburgh Pirates in a trade last summer.

Meanwhile, the Rays also announced infielder Daniel Robertson had surgery on his right knee to remove a loose body and is expected to miss four to six weeks.

The Rays (45-33) will begin a series at Target Field Tuesday night against the first-place Minnesota Twins.