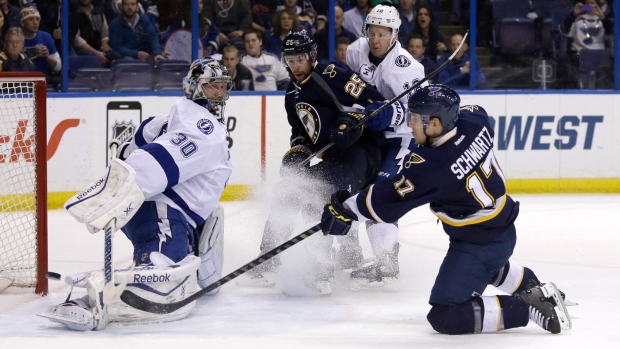 ST. LOUIS - Brian Elliott and the streaking St. Louis Blues found another way to win Tuesday night against one of the top teams in the NHL.

Elliott stopped 30 shots, Vladimir Tarasenko tied the game late in the third period and then Jaden Schwartz scored in overtime to give the Blues a 2-1 victory over the Tampa Bay Lightning.

"If we can keep it close, we usually find a way to do something at the end of the game," Elliott said. "That's not really the way we want to win it, but a huge win for us at home here. It shows us the level we need to get at. We escaped with two points there. We have to be happy with that but also look at our game and why we didn't do the things we wanted to."

"That's a good team over there and they are going to be there at the end of the year," Elliott said. "So it's teams like that where we're going to have to win when we don't play our best, and tonight was basically one of those."

Eastern Conference-leading Tampa Bay (32-15-5) has struggled on the road this season, going 11-12-3 with four straight defeats.

"It's just a little frustrating," said goalie Ben Bishop, a St. Louis native who stopped 16 shots against his former team. "We played a really good game, probably deserved a little better. Their goalie played well and we've got to be happy with the way we played."

Lightning rookie Cedric Paquette opened the scoring with his sixth goal in four games and 11th of the season.

Paquette, selected the NHL's second star of the week Monday, hammered home a rebound at 5:20 of the first period after Elliott couldn't corral Alex Killorn's shot from the left circle.

The Lightning held that 1-0 advantage until Tarasenko scored with 3:10 left in the third period.

The Blues' leading scorer whistled a wrister past Bishop's left shoulder from beyond the right circle after Paul Stastny won a faceoff in the offensive zone. The goal was Tarasenko's 26th.

"Good draw by Stas," Schwartz said. "That's a play that we've done before. He was on his off hand, so it was just a great draw and then a world-class shot there. Not a lot of goalies will be able to save that."

Schwartz won the game with his 18th of the season 1:16 into overtime, assisted by Chris Butler and Elliott. Schwartz skated through the slot and went forehand, backhand, forehand, backhand and forehand again before beating Bishop with a shot from his knees.

"Just a good move," Bishop said. "Kind of froze me there and went around."

The Lightning fell to 22-0-2 when leading after two periods.

"I think we were the better team out there tonight," Paquette said.