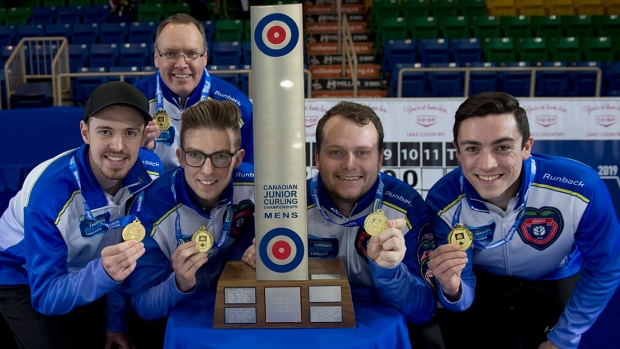 The B.C. skip downed Manitoba's JT Ryan 7-5 in the men's final on Sunday and became the first to win the event three times in a row.

"It's hard to pinpoint one that's most special," said Tardi. "The first is unreal just because it's the first time. Second, we got to tie the record with some of the great junior curlers like John Morris, and now to pass them is just an unbelievable feeling."

Tardi's squad opened the scoring in the second end with a takeout to put them ahead 3-0, but Ryan answered with two scores in the fourth and followed it up with a steal of two in the fifth to go ahead 4-3 heading into the fifth-end break.

"We're no stranger to giving up threes early," said Ryan.

"If you're going to give up a three you want to give it up in the second end. We know we've been resilient all week and we knew if we could string some shots together we could battle back and that's what we did."

But B.C. surged back with a deuce in the eighth and a steal of one in the ninth end to lead 6-5. Manitoba had hammer in the final end, but gave up another steal of one.

"They played unreal and we played one of our best games I'd say we ever played together too. It just wasn't enough. It was an inch here or there," Ryan said.

Earlier Sunday, Alberta's Selena Sturmay stayed perfect at the event, guiding her undefeated team to a 9-6 win over B.C.'s Sarah Daniels in the women's gold-medal game.

With the victory, Alberta became the first women's team to win the Canadian junior curling championship with a spotless record since Ottawa's Rachel Homan completed the feat in 2010. Only six other women's teams have run the table since the inaugural event in 1971.

"It definitely feels surreal right now. It definitely hasn't kicked in that we're Team Canada, but I'm sure it will within the next couple of days. I'm just over the moon happy right now," said Sturmay.

Both winning teams will represent Canada at the 2019 World Junior Curling Championships in Liverpool, N.S., next month.