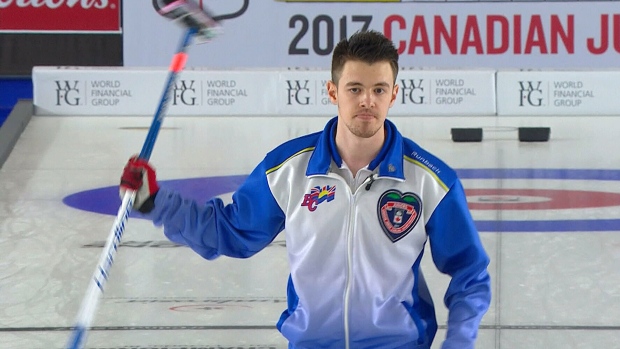 The B.C. skip (9-1) advanced directly to Sunday's final with a 7-3 win over Nova Scotia's Graeme Weagle in the final game of the championship round on Friday morning.

Tardi will face the winner of Saturday's semifinal between Saskatchewan's Rylan Kleiter (8-2) and Manitoba's J.T. Ryan (7-3).

Manitoba beat Saskatchewan 9-4 in championship round play on Friday.

"I think (our experience) is pretty big," Tardi said. "Playing on TV for most juniors, it’s the first time, and we have a few games under our belt, so I think the nerves are a little more settled down for us, fortunately, and we are going to be prepping (Saturday) as much as we can to be sure we can perform in the final.”

On the women's side, Alberta's Selena Sturmay is heading to Sunday's final after improving to 10-0 with a 9-4 win over Saskatchewan's Sara England.

Defending champ Kaitlyn Jones of Nova Scotia secured a spot in Saturday's semifinal with a 9-8 win over Quebec's Laurie St-Georges.

Jones will face B.C.'s Sarah Daniels, who beat St-Georges 8-6 in a tiebreaker on Friday afternoon.

The winning teams Sunday will represent Canada at the world junior championships, Feb. 16-23 in Liverpool, N.S.