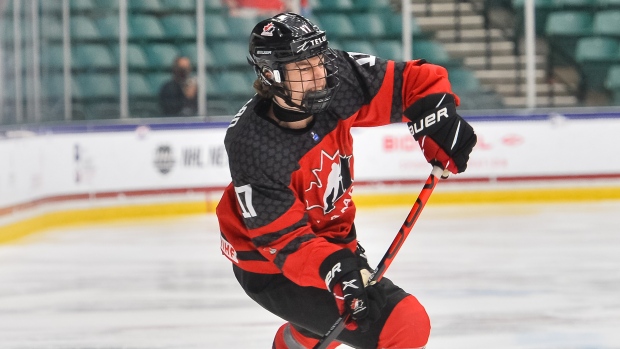 Team Canada will look to cap a dominant run at the U18 World Championship when they take on Russia in the gold medal game on Thursday night.

Watch the game LIVE at 9pm et/6pm pt on TSN3, TSN Direct, and streaming on TSN.ca.

Canada advanced to the final with an 8-1 win over Sweden in the semifinals Wednesday, their second rout of the Swedes after opening the tournament with a 12-1 win.

Team Canada goalie Benjamin Gaudreau leads the tournament with a 2.00 goals against average and .922 save percentage.

Canada has been strong all tournament, winning all six of their games and with four of those six wins by seven or more goals. Canada’s 4-2 win over Latvia in their second game of the tournament was their smallest margin of victory.

The Russians advanced to the gold medal game after edging Finland 6-5 in the semifinals. It was a rematch of Finland’s 4-3 shootout win over Russia in the preliminary round.

That was Russia’s lone loss of the tournament. They topped the United States 7-6 in overtime and beat Germany 5-1 and the Czech Republic 11-1 in the preliminary round before advancing to the semifinals with a 5-2 win over Belarus in the quarterfinals.

Russian goalie Sergei Ivanov is second to only Gaudreau in the tournament with a 2.36 GAA and .920 save percentage.