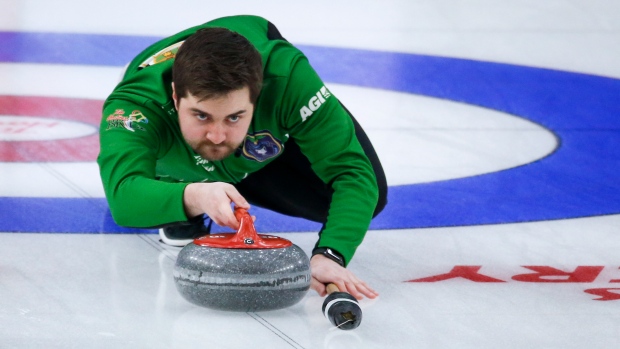 Over the past year, many people in Canada and around the world have spent the vast majority of their time with the ones they live with.

The same can't be said for most teammates preparing for this week's Tim Hortons Brier inside the curling bubble.

Brad Gushue and his rink from St. John's, Nfld., won their third Brier in four years last March days before the COVID-19 pandemic hit North America. As a result Gushue hadn't seen his lead Geoff Walker, who lives in Alberta, since that memorable night in Kingston until they both arrived in Calgary for this year's Brier.

Manitoba third Adam Casey got to know his new teammate in second Matt Wozniak just this week during quarantine.

"Woz and I have decks beside each other [in the hotel] and didn't really meet each other before this spiel so we were doing two-a-day sessions out on the deck asking all the routine questions trying to get to know one another," Casey told the media this weekend.

Ontario's Scott McDonald and Jonathan Beuk are sparing for Nova Scotia and New Brunswick this week and both had nothing more than a Zoom chat with their new teams leading up to the Canadian championship.

Saskatchewan's Team Matt Dunstone might be on the opposite side of the spectrum.

Like many teams at this year's Brier, Dunstone and company struggled to find ice time this season after the second wave took hold in November.

The team's home curling club, Regina's Highland Curling Club, was closed due to COVID-19 restrictions. With few options available to prep for nationals, Team Dunstone got a call from a curling club in small-town Wadena, about a two hour drive north of Regina.

After passing healthy and safety protocols, Team Dunstone were allowed to use the facility multiple times per day for two weeks leading up to the Calgary Brier. Dunstone says he's grateful for the training camp like atmosphere the town of Wadena provided as well as the opportunity to quarantine together as a team.

"It was phenomenal to stay every waking second together for two weeks," Dunstone said on Sunday after improving their record to 2-1 with a win over Newfoundland and Labrador. "What more could you ask for? We basically just moved in with the boys. We had a heck of a time and we're going onto week three here and we're still good buddies. So, all is good. Just to get a feel on the ice. The ice in Wadena was so good. It was very beneficial coming in."

Kirk Muyres, the new second on the team this season, says the multiple days spent with his new squad was invaluable given they weren't able to play a typical tour season in 2020-21.

"For me to get a little bit of a feel for the different personalities and where I fit in that group, that was probably the biggest takeaway from myself there," explained Muyres.

The 30-year-old Muyres had spent the past couple seasons skipping his own rink in Saskatchewan before making the move to second with Team Dunstone. With the addition of the five-rock rule in today's game, Muyres says what is needed from the position has changed.

"I think the second and third position have kind of evolved to be the same position. That was one of the thought processes that went into this [joining Team Dunstone]. I know I hold myself at the third and skip position and I give us a good chance at the second position," explained Muyres.

Dunstone, 25, made an impressive run at last year's championship, finishing third after reaching the 1 vs. 2 page playoff. It marked the first playoff appearance for the prairie province since 2015.

Team Dunstone were propelled by a handful of world class shots from their skip at last year's Brier, including a pair of game winners that sent packed crowds watching at Leon Centre into a frenzy. It will surely be a different experience inside the bubble with just cardboard cutouts filling the Markin McPhail Centre.

“I think early on we realized you have to create your own energy out here. Obviously, we don’t have the fans in the building. It’s about creating the energy amongst the four or five of your guys out on the sheet,” Dunstone said earlier this week.

Saskatchewan third Braeden Moskowy, like all curlers at this year's Brier and Scotties Tournament of Hearts, knows how lucky they are to be competing in a major curling event during a pandemic.

“When something like this gets taken away and you’re not too sure if or when it’s going to happen, you appreciate it even more being here," he said. "I think that’s kind of the theme this week. We’re just grateful to be here and we got a great opportunity in front of us and hopefully we can go all the way this year.”

Saskatchewan hasn’t won the Brier Tankard since 1980 when Rick Folk stood atop the podium at the Stampede Corral in Calgary.