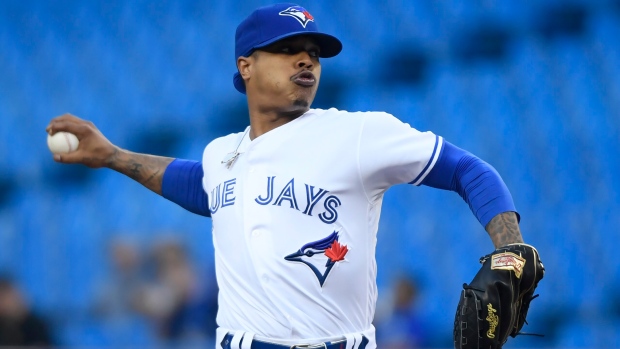 NEW YORK — At the very most, Marcus Stroman has four starts left in a Blue Jays uniform.

That’s just simple math based on the number of days between now and the July 31 trade deadline.

But there’s also a chance Sunday’s start in the Bronx against his hometown Yankees is the finale for the Toronto chapter of the Stro Show.

How Stroman pitches Sunday, combined with when the market decides to develop over the next 18 days, will determine when exactly, the 28-year-old right-hander is sent packing, but there’s certain to be no shortage of suitors, no matter what other arms are available.

From his steady, innings-eating ways to another year of team control in 2020, there’s a lot for contenders to like about Stroman.

From most likely to least likely, let’s take a look at 10 teams that should be at least checking in on what it would take to acquire the right-hander:

There’s mutual interest between the Yanks and Stroman, but does Blue Jays GM Ross Atkins have any interest in trading the righty within the division?

That’s the question that may matter here. This isn’t a case of an aging J.A. Happ on an expiring deal.

This is an in-his-prime performer who loves sticking it to those who wronged him, and facing Stroman for at least another year in pinstripes and watching the Yankees succeed with him may not be something Atkins wants to endure. That said, if they offer the best package of talent, the Jays may have to take it.

However, the Yankees’ need for another solid rotation arm is obvious so they could be willing to ante up.

The Twins have already checked in Stroman as well as closer Ken Giles, and when you take a look at what’s in the Minnesota pipeline, they may be one of the best matches out there.

Three of the club’s top prospects — shortstop Royce Lewis, outfielder/first baseman Alex Kirilloff and right-hander Brusdar Graterol — are reportedly off limits in trade talks, but there’s enough intriguing talent in the Twins’ system to still get a deal done.

Stroman would slide in nicely right behind Jose Berrios and give the Central Division-leading Twins a chance to really make some noise.

If Atkins is hesitant to deal Stroman within the division, he may also be hesitant to trade him to his arch-nemesis, too.

Arch-nemesis may be overdoing it, but the relationship between the current Blue Jays regime and the old one led by Braves GM Alex Anthopoulos is definitely icy, and Atkins would probably prefer not to watch Stroman leading a postseason push for his predecessor.

Once again, however, with that being said … you have to take the best deal.

Like the Twins and Yankees, the back end of the bullpen is a need in Atlanta, so Giles could be on the radar, as well.

When you dissect the Astros' rotation, Stroman may be a perfect fit in H-Town.

A valuable mid-rotation innings eater with a big game pedigree, the right-hander would slide in nicely right behind Justin Verlander and Gerrit Cole, just ahead of Wade Miley and Brad Peacock.

Another reason the Astros should be interested is the spin rates Stroman boasts, which has been a common trait among Houston arms recently.

Battling for both the Central Division and a wild-card at the same time, the Brewers are all in and desperately need to improve the rotation in order to be a factor.

The Brewers’ rotation ERA of 4.80 sits 19th in baseball, and Stroman would immediately slot in as their most reliable option.

We’ve seen Milwaukee GM David Stearns be aggressive when the time is right, but it’s questionable whether there’s enough talent in the system to top other packages.

Chasing the Braves for the division and right in the thick of a heated wild-card race, the Phillies are another pitching-needy contender, sitting 17th in baseball with a 4.57 rotation ERA.

The news that Jake Arrieta is dealing with a bone spur in his elbow may make them even more desperate. If they don’t pivot and decide to sell, that is.

Rumoured to be hot for Stroman when spring training began, the Padres are hovering around the .500 mark, which means they’re technically a player in the NL wild-card race.

The Padres could also be looking towards next year and make a move similar to what the Pittsburgh Pirates did last year at the trade deadline when they surprisingly acquired Chris Archer from the Tampa Bay Rays, and Stroman’s additional year of control should entice them.

Once again, the Athletics have found a way to cobble together a contender and they sit on the fringes of the wild-card race in the American League.

While the rotation has performed admirably this season, they lost Frankie Montas to a PED suspension and there’s a smoke and mirrors factor to consider.

The A’s could decide to add a less expensive piece and instead rely on their prospect depth, but Stroman’s controllable 2020 season might be extra attractive in this case.

Yet another team hanging around the .500 mark, the Angels are not a threat this season.

But eventually the Halos will have to surround all-everything superstar Mike Trout with talent, and it starts with building a capable rotation.

Again, this is where Stroman’s extra year of control comes into play.

If the Angels are serious about contending in 2020, they could make a move on Stroman and continue to build the rotation further this winter.

The Angels' rotation is currently carrying a 5.29 ERA this season, 25th in baseball.

An outside-the-box suitor, perhaps, the Rockies have the worst rotation ERA in baseball thanks to Coors Field, but they’ve managed to score enough runs to hang around the .500 mark.

If there’s a skill-set that could survive in the thin air, it’s Stroman’s ability to keep the ball on the ground, evidenced by his 57.5 per cent ground-ball rate, the second-best mark in baseball.

This would be another trade made with not just 2019 in mind.