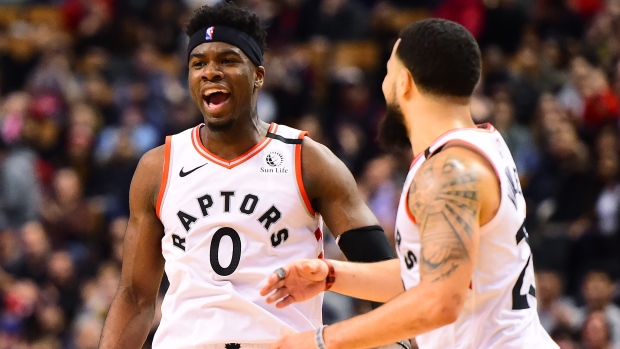 TORONTO — Terence Davis took a pass from Fred VanVleet with four-and-a-half minutes to play Sunday night, and drilled a three-pointer to propel him over the 30-point mark.

Exactly how VanVleet had drawn it up.

Davis poured in a career-high 31 points — with a little help from his teammates — and lifted the Toronto Raptors to a 129-102 rout of Chicago that stretched their league-best win streak to a franchise-tying 11 games.

The Raptors are just one victory away from their longest winning streak in franchise history.

"The guys kept finding me," said Davis, who had 13 of his points in the fourth quarter. "Fred, he said I had 28, so he gave me the ball again to get 30. I thought was pretty cool."

Pascal Siakam had 17 points, while Serge Ibaka chipped in with 16 for the Raptors (36-14), who had seven players in double figures. Chris Boucher had 15 points, Kyle Lowry finished with 14, VanVleet had 12, while Patrick McCaw scored 10.

The Raptors were missing Norm Powell, who broke a finger in the fourth quarter Friday at Detroit, Marc Gasol (hamstring) and Rondae Hollis-Jefferson (ankle).

Davis, whose previous scoring high was 23 points, wasn't named to the Rising Stars game as part of NBA All-Star Weekend, and admitted it was "in the back of my mind" during his offensive outburst.

Ibaka has taken the Raptors rookie under his wing this season. The two often head upstairs to the practice court to shoot after games. Davis has joked that he's afraid to eat junk food in front of the veteran big man on team flights.

Ibaka had nothing but praise for the 22-year-old on Sunday.

"Man it was beautiful," Ibaka said. "From the first day I saw him I knew he had talent. But even with talent you still need to have the right people around you. He had a good game tonight, but (Monday) I will be telling him, 'Yeah that was good, but you still have a ways to go.'"

The Raptors couldn't put any significant distance on a pesky Bulls squad until the fourth quarter. The Raptors went into the final 12 minutes up 95-85, their biggest lead to that point. McCaw's three-pointer four minutes into the quarter capped a 16-5 run by a group of Raptor reserves that had the home team up by 21 points.

Raptors coach Nick Nurse stayed with his bench group through the game's final few minutes. When Davis drilled a three-pointer with 4:26 to play, giving Toronto a 25-point, he was mobbed by teammates when he headed to the bench for a timeout.

"It felt really good. It just shows you what type of team this is, this is a great organization, we all love each other, we care for each other, and I wouldn't want to be anywhere else, honestly," Davis said.

His words had Raptors rookie Dewan Hernandez — who was standing with reporters around Davis — choke back a mock sob.

Lowry said it's fun to celebrate each other's accomplishments.

"At the end of the day, we take our jobs very seriously. And when we have opportunities to go out there and cheer for each other and have fun with each other, it means a lot," he said. "We don't take any of it for granted. We're really serious about winning games and going out there and competing. And when guys have good nights and have records set and things like that, we celebrate together."

"I always think of the games that I play him about six minutes and I wonder what the hell I'm doing, that’s the first thing I think of when he's playing like that," the coach said.

"I don't really know what to say. I think he's got a shooting component that's pretty high level, right? You see it a little I bit on a night like tonight and that's usually the toughest component to get in this league."

VanVleet provided one of the other highlights of the night, putting Tomas Satoransky on his backside with a slick crossover dribble. VanVleet scored on a three on the play, and the Raptors bench erupted in celebration — Oshae Brissett made like his ankles had been broken, collapsing into the arms of Malcolm Miller.

The Raptors are second in the Eastern Conference and boast the league's third-best record despite being decimated by the injury bug this season — 13 players have missed time for an array of injuries.

Powell's injury came while he was playing the best basketball of his career, averaging career highs in both points (15.3) and rebounds (3.9). Nurse said Hollis-Jefferson, who's missed four games with a sprained ankle, could return Wednesday. But Nurse said there was no update on Gasol, who aggravated his hamstring injury that had seen him previously miss a dozen games. The veteran big man has missed 15 games with the injury.

Siakam led the way with eight points in the first quarter, and his turnaround jumper midway through the frame had the Raptors up by nine. The Bulls went on an 18-4 run, but the Raptors responded with 11-3 run to close the quarter, and led 33-29 to start the second.

The Bulls got hot from beyond the arc, connecting on seven of their three-point attempts in the second quarter. The lead changed hands five times in the period, and Chicago took a 63-60 advantage into the halftime break.

Notes: Nurse was cheering for Kansas City over San Francisco in Sunday's Super Bowl. "I grew up three-and-a-half hours north of Kansas City (in Carroll, Iowa), spent some time there. Not a Kansas City fan by any means but today I am."