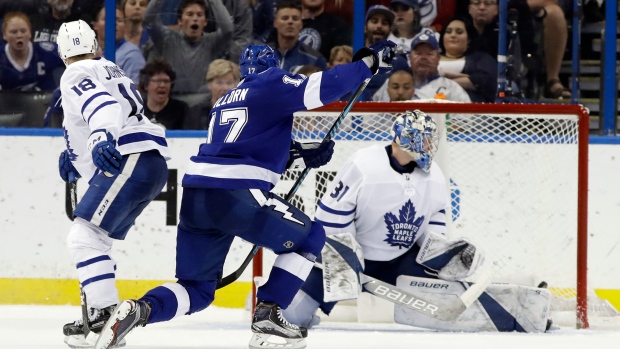 Are you ready for some hockey - and another season of TSN’s 7-Eleven Power Rankings?

The Tampa Bay Lightning, who were tops in the East last season but ousted by the eventual Stanley Cup-winning Washington Capitals in the conference final, open their season on Saturday and are the No. 1-ranked team in our first Power Rankings of the season, according to consensus rankings formulated by the TSN Power Ranking panel of Ray Ferraro, Jeff O’Neill, Jamie McLennan, Craig Button and Darren Dreger.

Steven Stamkos and Nikita Kucherov, if healthy, plus consistent play from Andrei Vasilevskiy could push the Lightning to the final next spring. But if the Maple Leafs have anything to say, that’s not going to happen.

The Leafs are the No. 3-ranked team in Week 1 and a genuine Cup contender, thanks in part to new GM Kyle Dubas luring Tavares to T.O. in a bid to finally end a long Cup drought. Many are also counting on a healthy Auston Matthews and a beefed-up Mitch Marner, plus the hard work of Frederick Andersen between the pipes, to lead the Leafs into the postseason promised land.

Led by Mark Scheifele and Patrik Laine, the No. 2 Winnipeg Jets are also expected to be in the Cup mix after finishing last season with the league’s second-best regular-season record. But, as Winnipeg fans painfully recall, the Jets were sent packing by the out-of-this-world Vegas Golden Knights in five games in the conference final. The Jets open their season Thursday against the Blues in St. Louis.

Rounding out the top five teams in our first power ranking of the new season are the No. 4 Nashville Predators, who will need Pekka Rinne to stay true to form in the postseason to take the Presidents’ Trophy winners beyond the second round, and the Capitals, minus departed head coach Barry Trotz, who land at the No. 5 spot. The Predators begin play on the road Thursday against the New York Rangers while the Caps visit their longtime nemesis, the Penguins, in Pittsburgh the same night.

Other top-10 teams as ranked by our panel two days before the first puck drop of 2018-19 include the No. 6 Boston Bruins, the Sharks at No. 7, the Penguins at No. 8 followed by the No. 9 Golden Knights and the Columbus Blue Jackets at No. 10.

Following the Jets and Leafs this week as Canada’s top teams are the improved Calgary Flames at No. 12 and Connor McDavid’s Edmonton Oilers on the playoff bubble at the No. 17 spot.

Fighting to stay legitimate in the NHL’s cellar as the five worst teams heading into the new season are the gutted Carolina Hurricanes at No. 27, the No. 28 Henrik Zetterberg-less Detroit Red Wings, the fragile Chicago Blackhawks at No. 29, the No. 30 Vancouver Canucks minus the retired Sedin twins, and the Ottawa Senators, with Karlsson finally out of the picture, as their ugly rebuild unfolds at No. 31.

The only notable change in the East’s top team is the exit of GM Steve Yzerman. The team has been built so it shouldn’t be an issue right now, but the Bolts must find another postseason gear.

The franchise finished with the NHL’s second-best record last year and won its first playoff series since 1990-2000 in Atlanta. Now they’re hoping for more from Laine, Scheifele and company.

John Tavares brings the Maple Leafs closer than ever to the Stanley Cup that has eluded them since 1967. Auston Matthews, Mitch Marner and Frederik Andersen will need to stay healthy.

Not many changes, and not many needed for the first overall finisher in last year’s NHL. Pekka Rinne will have to take the Preds deeper but having new blueliner Dan Hamhuis in front will help.

The core (Ovechkin, Kuznetsov, Oshie, Backstrom, etc.) is still intact for the Stanley Cup champions, but they have a new coach in Todd Reirden after losing Barry Trotz to the Islanders.

The Marchand-Bergeron-Pastrnak line is one of the best in the league, but if it remains together the worry is secondary scoring. Krejci, DeBrusk and Donato will need to crank it up a notch.

Add Erik Karlsson to a 100-point team - with a blueline that already boasts Marc-Edouard Vlasic and Brent Burns – and the Sharks odds of winning their first Cup dramatically improve.

The core of the team that has won two Cups in the last three years is still intact but Matt Murray will need to improve upon his 2017-18 SV% and GAA and stay off the injured list.

It won’t be easy following up the most incredible expansion season in all of North American sports, but landing Max Pacioretty and Paul Stastny in the off-season will improve the odds.

They begin their 18th season without ever having won a playoff series. The last two seasons have been their two best, although both ended in first-round losses. Will Artemi Panarin stick around?

The Blues started strong but then missed the playoffs by just one point last year. The addition of Ryan O’Reilly should make up the difference in the hunt for another postseason.

New coach Bill Peters will get an offensive boost from James Neal and Elias Lindholm but will need Mike Smith to stay healthy. They must also fix their power play – third worst in the league last season.

They missed the playoffs last year by a single point, but after the all-star break went 25-8-2 – tops in the NHL. Keep an eye on Barkov, Trocheck, Huberdeau, Dadonov, Bjugstad and 39-year-old Luongo.

New head coach Jim Montgomery hopes his success at the U of Denver will translate to the NHL. He should get help from Valeri Nichushkin who’s back from the KHL and emerging rookie Miro Heiskanen.

With James van Riemsdyk joining Wayne Simmonds, the Flyers' net-front presence with be second to none. But will the goaltending (Elliott, Neuvirth) turn into a problem down the stretch?

Before being swept in the first round of last year’s playoffs, the veteran Ducks were 10-1-1 over their final 12 games. They’ll have to do it without Corey Perry who is out for five months.

They finished 20 points out of a playoff spot and will attempt to make that up with the same core group. But it’s a core group led by McDavid that must find an answer to their league-worst power play.

After almost doubling their points from 48 to 95 in one year, they will be hard-pressed to further improve on that mark. Luring Grubauer away from the Caps is a smart move and MacKinnon is a real star.

Before breaking his contract to return to Russia, Kovalchuk had four 40-goal seasons and two 50-goal seasons in his prime. But how good will he be at 35? Both Carter and Quick will need to be healthy.

Very little is different from last season’s surprise playoff team, which rose from last place in the Eastern Conference. The Devils will be counting on Taylor Hall to have another MVP season.

New GM Paul Fenton only added depth players in the off-season as they try to break their string of three first-round playoff exits. Is it time for the Wild to make a few deadline deals and go younger?

The Canadiens have lost two of their better scorers in recent seasons and have failed to add a scorer that can replace them. Carey Price must return to form or Antti Niemi will get more starts.

New coach Barry Trotz and new GM Lou Lamoriello both have a history of success as they attempt to turn around a team that has lost John Tavares. Calder Trophy winner Mathew Barzal will be tested.

They have tabbed Boston University coach David Quinn to turn around a team that purged its roster and then finished last in their division. They failed to add any players of significance in the off-season.

They cleaned house from the top down and hope to end a streak of eight consecutive seasons missing the playoffs. Scott Darling will need to fix his game and having D-man Dougie Hamilton should help.

The Red Wings remain in a rebuild mode of sorts and will miss 37-year-old Henrik Zetterberg, forced to retire after 1,082 games with back issues. Will Andreas Athanasiou take another step?

One poor season after nine consecutive years in the playoffs and three Stanley Cups is likely an aberration, especially with the core talent the Hawks still have and Corey Crawford healthy again.

It’s the end of an era in Vancouver with the Sedin twins gone. But rookie Elias Pettersson and a healthy Brock Boeser and Bo Horvat will make the loss easier to swallow under players' coach Travis Green.

It will be hard for the Senators to do worse than 30th overall, but it’s going to be harder to improve after trading Erik Karlsson. Another horrible season is in store for Sens fans with the rebuild underway.