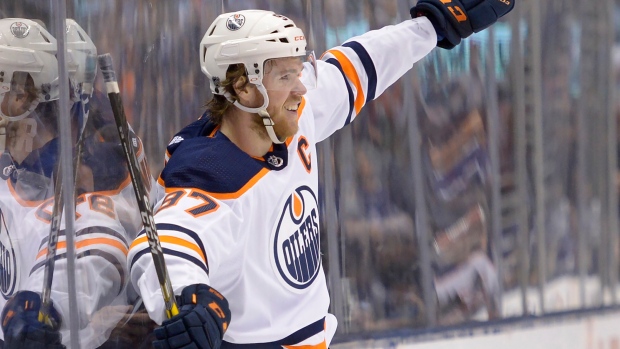 One of the interesting wrinkles of the National Hockey League’s redesigned playoff format to conclude the 2019-20 regular season is the loss of home-ice advantage.

The creation of hub cities – reportedly Toronto and Edmonton – is designed to create the safest environment possible for teams to return to play. The idea is that putting players, coaches, and support staff in a tightly controlled area will minimize the possibility of coronavirus spread through rigorous testing, tracing and isolation procedures.

Whether or not the league can pull this off is still anyone’s guess, and there are any number of moving pieces that could jeopardize the current plan. For now, the league and the NHLPA are working together to push through Phase 2 and towards the NHL reopening.

But the hub city setup, which covers the entirety of the postseason, will effectively eliminate home-ice advantage.

These games will be played in empty arenas void of fans – no raucous arenas means no pressure for referees to appease home crowds through penalty calls or non-calls, and certainly none of the off-ice perks that a standard home game delivers. (It’s also worth noting that a shorter five-game series, as opposed to the normal seven-game series, may lend itself to added randomness.)

In a normal setting, we see home teams win about 55 per cent of the time, though the playoffs have been a bit more volatile of late. If that home team also has a sizable talent advantage over their road opponent, that number would expectedly creep north from 55 per cent – the opposite is true in the rarer instances in which the road team is actually the better of the two.

Think about the (7) New York Islanders vs. (10) Florida Panthers matchup for a second. With 10 or so games remaining when the season was paused, two points and four goals separated the teams. It is reasonable to assume that the teams are of comparable talent, but the reward for the Islanders finishing higher in the standings that has existed historically (home-ice advantage) no longer applies. To that end, we are effectively looking at as many as five ‘coin flips’ during the play-in round: 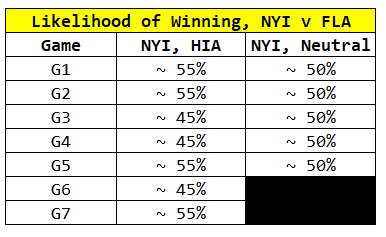 It may not be as significant as the calibre of an opponent, as one example, but the loss of home-ice advantage certainly stings. And the shortening of the series – something that would have been quite advantageous to home teams if they weren’t in the hub city setup – doesn’t come into play here because all five games (if required) will be played on the same sheet of ice with a negligible advantage to either side.

It is also worth remembering that what’s true for the Islanders here is true for every home team in the play-in series. From the Pittsburgh Penguins (102-point pace) through the Calgary Flames (93-point pace), each club lost a small slice of advantage by way of losing home ice.

Cumulatively, their odds of advancing are proportionally diminished, which means there is a slightly higher chance of first-round upsets than usual. This is important for any multitude of reasons, but chief among them is the fact that any team who loses in the play-in round will have a 12.5 per cent chance of landing budding superstar Alexis Lafreniere with the first overall pick.

If the NHL is able to engineer a successful return to play plan and bring hockey back to the world this summer, that’s only good news. But with that good news will come a heightened likelihood of one or more quality hockey teams – teams that were headed to the playoffs in the first place – dropping their play-in series matchup and entering the lottery draw – a draw that could have awesome repercussions for the league.