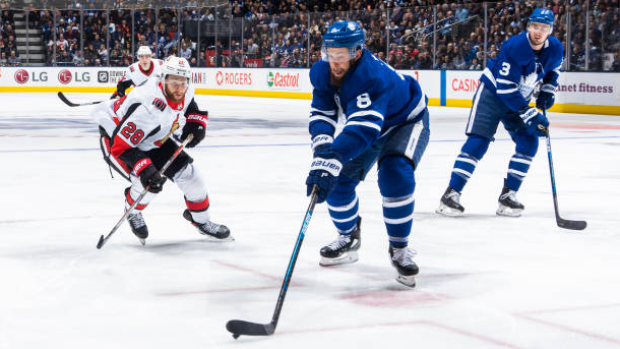 TORONTO — Sheldon Keefe doesn't expect the Ottawa Senators to be doormats much longer.

And after seeing many of their prospects up close in the minors the last few years, not to mention some key off-season acquisitions brought to the nation's capital, the head coach of the Toronto Maple Leafs believes the temperature of the once-nasty Battle of Ontario — a minor skirmish at the best of times since the mid-2000s — is about to rise significantly.

"The rivalry certainly will heat up," Keefe said. "They're a team that's going to get better every single day as an organization ... the number of young players they have coming in addition to all the players they've added, it's essentially an entirely new team.

The NHL's abbreviated 56-game schedule, which includes a newly formed North Division so Canada's seven clubs don't cross the U.S. border because of COVID-19 travel restrictions, will see the Senators and Leafs play nine times between now and May 5, including a back-to-back set Friday and Saturday in Ottawa.

Viewers in the Maple Leafs and Senators regions can watch the first meeting of the two teams LIVE on TSN4 or TSN5 at 7pm ET.

"Some of the toughest games we played in the regular season," Keefe said of his team's matchups with the Senators in 2019-20. "There's an extra sense of urgency when Ottawa plays against Toronto. I felt that.

"We're expecting no easy nights against the Senators."

There were, however, plenty of those for teams across the NHL in recent years.

Ottawa finished 30th, 31st and 30th the last three seasons following a stunning roster teardown not long after getting to within a goal of reaching the 2017 Stanley Cup final.

But the Senators now appear to be coming out of that painful rebuild.

A young core led by Brady Tkachuk and Thomas Chabot was boosted at October's draft, most notably in the form of No. 3 pick Tim Stutzle. Ottawa also made a number of moves for veterans, including goalie Matt Murray, defencemen Erik Gudbranson, Josh Brown and Braydon Coburn, as well as forwards Derek Stepan, Austin Watson, Cedric Paquette and Alex Galchenyuk.

"They're obviously looking to make big strides," said Leafs captain John Tavares, who grew up in the Toronto area and remembers the Battle of Ontario's heyday of the late 1990s and early 2000s. "They made a lot of strong moves in the off-season, they have a lot of young players they've been drafting and developing.

The Leafs opened the pandemic-altered schedule Wednesday with a 5-4 overtime victory at home against the Montreal Canadiens in a game where they looked half asleep until one of Toronto's off-season additions — Wayne Simmonds — helped lift his team by fighting Ben Chiarot.

"Dropping the gloves and the momentum gained ... that can be talked about," Tavares said of Simmonds. "(But) just the intensity, just the attitude and engagement from him shift in and shift out, being involved physically, being around the puck. Skating, moving his feet, being hard to play against, all those intangibles.

"Having that in our lineup and him leading the charge just sends a great message and (sets) a great tone for the group, and is kind of what we're looking for."

The additions of Simmonds, fellow veteran forward Joe Thornton and bruising defenceman Zach Bogosian were largely about effort and culture change in Toronto. Ottawa was looking for obvious talent upgrades, but also leadership qualities and an ability to insulate some of its youngsters.

Ottawa head coach D.J. Smith, an assistant with the Leafs from 2015 through 2019 under Mike Babcock, said there are similarities between what's happening with the Senators and what his old team went through before becoming a contender.

"It's a patient process," he said. "I believe in Ottawa we're going to have a good team for a long time."

The Senators, who weren't part of the NHL's summer restart and haven't played since March, are under no illusions about where they're likely to finish in the North Division. With the other six teams on the circuit at different stages of development and expectation, the reality is Ottawa should be in tough to finish anywhere other than last.

But the foundation Smith is intent on building is all about battling for every inch of ice — and setting the Senators up for the future.

"If we want to have any success farther down the road in the playoffs, you realize they're big, strong teams," he said. "The most competitive people win. We have to continue to be competitive.

"As long as do that, we're going to continue to climb."

They'll have a first test with their home opener Friday. And then they'll do it all over again 24 hours later.

This report by The Canadian Press was first published Jan. 14, 2021.