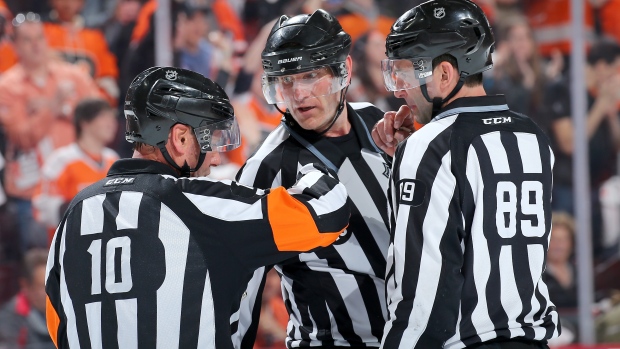 NHL governors are on their way to Pebble Beach for a series of meetings that will deal with the following: expansion, lack of scoring, concussions, salary cap, all-star games, outdoor games, golf games etc.

May I make one suggestion? Cancel the entire agenda and deal with one topic and one topic only -- the complete and utter mess that has been made of coach challenges.

Deal with it in the following manner - play a tape of the ridiculous scene at the end of Saturday's Washington-Winnipeg game, and then propose the unanimous passing of a motion that the league must start over and make sensible and understandable rules to cover challenges for goalie interference and offside.

"THUMBS DOWN". I'm using capital letters for the first time. Oh, and an exclamation mark, too!

Anyone who remembers the infamous "tip of the skate in the goal-crease" fiasco that dogged the NHL during the 1990s surely recalls it as the dumbest thing a sports league ever did.

Mike Babcock's quote was: "We send out more press releases on goalies than any team in the league." And he might have added that the Maple Leafs get criticized no matter what those press releases say.

First, there was the news that rookie Garret Sparks was being called up from the AHL Marlies to start in place of the injured James Reimer. The Leafs were criticized by some for wanting two points from the game against Edmonton so badly that they snubbed the struggling Jonathan Bernier. The argument was that Bernier's confidence needed a boost more than the Leafs, given their long-term plans, needed a win. Sparks got them that win, and made himself a hero for a day with a shutout in his first NHL game, also a first in the team's history. Two nights later in Winnipeg, it was a different story. Sparks was shelled for six goals after Bernier was dispatched to the Marlies for a conditioning stint, where he got a shutout on Friday night. In between, on Thursday, Reimer returned to action in Minnesota and was victimized by the zero in the Leafs' 1-0 loss to the Wild. Reimer was supposed to play again last night in St. Louis. But no, he's hurt again, so there's reason to wonder if he tried too hard to play too soon.

Cue the criticism on that note, and then listen to both sides of the debate about the importance of winning, because they came to agree.  Fans who felt Bernier should have been playing ahead of Sparks because he deserved it wanted him recalled immediately, and fans who wanted the Leafs to do all they could to beat the Blues probably felt the same way. So heads were shaking when Sparks got the call again, and the reason was that Bernier's conditioning time with the Marlies could not be interrupted without being ended, and the Leafs themselves decided it was more important to stick to the plan. Sparks vs. the Blues? A 4-1 win for Sparks and the Leafs.

Also mentioned in the press releases have been Antoine Bibeau, Sparks' backup last night, and Zamboni driver Dave Ayres, who had to be signed to an amateur tryout so the Marlies could have a second goalie in uniform while all the shuffling was going on. For some reason, it's "thumbs up." Because you have to smile.