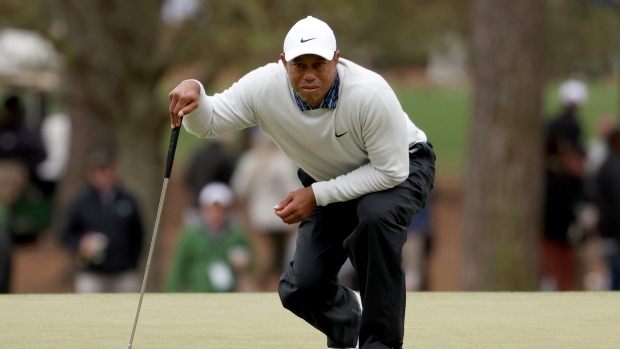 Tiger Woods visited Southern Hills Golf Club in Tulsa, Okla., on Thursday for a practice round ahead of the PGA Championship.

Woods teed it up on the course where he won the 2007 PGA Championship, choosing to walk with the club’s head professional serving as his caddie.

The news of his appearance was much more muted than when Woods plane was tracked to Augusta, Ga., ahead of a pre-tournament round at the Masters. At that time, social media exploded with the possibility of his return.

Last week, Woods filed the paperwork necessary to gain an exemption into the year’s second major but had not officially committed to playing. The scouting mission to the course would appear to bring him closer to being in the field when the tournament begins on May 16.

Southern Hills underwent an extensive $11-million renovation three years ago by architect Gil Hanse and will provide a much more demanding test then the last time the best players in the world teed it up here. It will also be, as its name suggests, a hilly walk although not as severe as Augusta National.

That’s good news for Woods who looked drained at the end of each round of the Masters, playing with his injured right leg. The 15-time major champion still managed to make the cut en route to a 47th-place finish.

Woods has already stated that he will play the Open Championship at the Old Course in St Andrews, Scotland in July. He has also filed the necessary paperwork to tee it up at the U.S. Open at The Country Club in Brookline, Mass., but has not indicated yet whether he will show up.