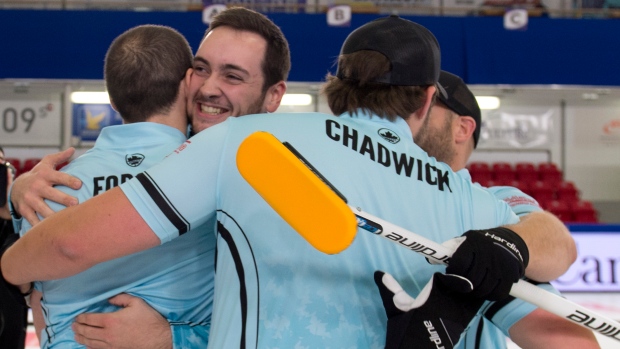 Highlights: Team Horgan are in their first year together as a foursome and have found some success on Tour, advancing to the playoffs in three of four events. They saved their best play for the Pre-Trials, posting a total record of 8-1, capping the week off with a 7-4 win over Glenn Howard in the B-final.

Qualified for the Tim Hortons Curling Trials by beating Glenn Howard in the B-side final at the Home Hardware Curling Pre-Trials in Liverpool, N.S., in late October.

Team Horgan will win the Trials if…

"They showed at the Pre Trials they belong. The Tim Hortons Curling Trials will be an invaluable learning experience for Team Horgan. If they go in with that attitude, this team could surprise the field and themselves."

Tanner Horgan and his rink from Kingston, Ont., don’t have any Trials experience, but their 23-year-old skip is ready for the challenge that lies ahead.

“There's a shot to go for the Olympics,” said Horgan after his team’s Pre-Trials victory over Glenn Howard. “Getting there now this early in my career is just something that I've always wanted to do. I think it will be an amazing stepping stone for us, and I want to soak it up and learn as much as I can."

Jonathan Beuk, Wes Forget and Scott Chadwick competed at their first Tim Hortons Brier in 2019, at that time playing for Scott McDonald.

The Kingston foursome broke out onto the curling scene that winter after going undefeated at provincials, including three straight wins over top contender John Epping.

At the Brier in Brandon, Man., Team McDonald made the championship pool and finished with a 6-5 record.

They missed out on the Canadian championship the next couple seasons, but Beuk was in the Calgary bubble last year, helping out New Brunswick’s James Grattan as a third.

Meanwhile, Horgan, a 2016 Canadian junior silver medallist, hadn’t been able to find his groove on the pro circuit over the last few years until taking over skipping duties for this squad in 2021-22.