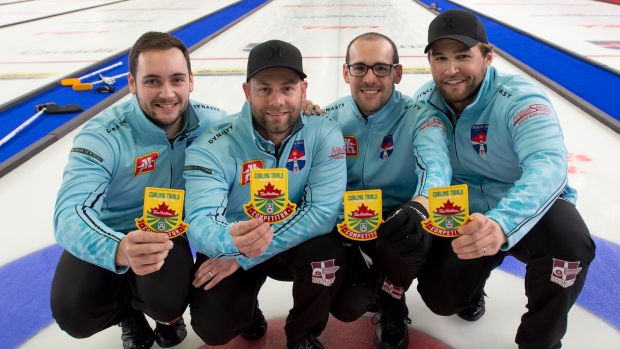 LIVERPOOL, N.S. — Tanner Horgan’s chance of representing Canada in Beijing is alive after he punched his ticket to the Canadian Olympic curling trials on Sunday evening.

The 23-year-old from Kingston, Ont., became the youngest skip to advance to the 2021 Tim Hortons Trials.

Horgan earned the final spot in the event with a 7-4 win over veteran Glenn Howard in the ‘B’ side final at the 2021 Canadian Curling Pre-Trials.

“I think what also makes it tough is you're playing on good conditions against everyone who is trying to peak for this event,” said Horgan. "A lot of teams did peak for this event, and they were playing very well, but I'm just so proud of the guys for keeping their composure through the whole game and staying tough.”

Horgan edged the 59-year-old Howard with an open hit to score one and secure the win in the 10th end.

“There's a shot to go for the Olympics,” added Horgan. “Getting there now this early in my career is just something that I've always wanted to do. I think it will be an amazing stepping stone for us, and I want to soak it up and learn as much as I can."

Horgan played the ‘B’ final after losing 9-8 to Gunnlaugson in the first men's qualifying game earlier Sunday.

Horgan tied the score 8-8 with three in the ninth end before Gunnlaugson countered with the winning point in the 10th end.

Gunnlaugson clinched a fourth straight trip to the Tim Hortons Trials although the last two were as an alternate. This time around, he'll be a skip for the first time since 2009 and be joined by vice-skip Adam Casey, second Matt Wozniak, lead Connor Njegovan and coach Garry Van Den Berghe next month in Saskatoon.

"To get to the Trials was a huge goal for us," he said. "This is a tough event, but it was a lot of fun and we got through it.

"So, pretty happy with that."

Harrison lost the 'A' side final Saturday night to Krista McCarville. On Sunday, her rink stole five straight points en route to a commanding 7-0 led.

"We're a newer team and haven't been together as long as some of the other really great teams here," Harrison said. "We take the underdog role and run with it.

"We know we can fly a bit under the radar so we took that to our advantage and had a great week. The team played so well (Sunday) and all week so to come into this week and come out with a victory? I can’t even describe it."