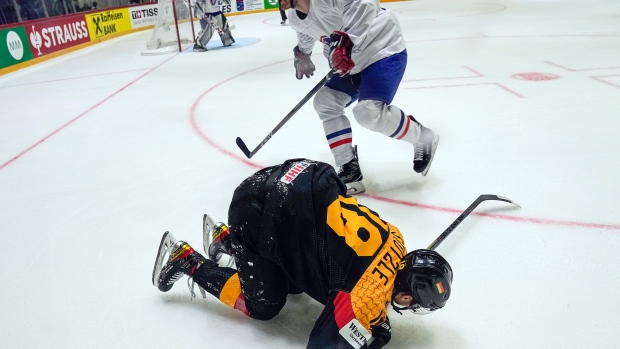 The injury to Tim Stützle does not appear to be as serious as initially feared and he will be re-evaluated over the next few days, tweets TSN Hockey's Gord Miller.

News from Team Germany the @IIHFHockey Men’s World Championship: the injury to Tim Stützle does not appear to be as serious as initially feared, he’ll be re-evaluated over the next few days.

The 20-year-old Ottawa Senators forward was injured during Monday's matchup with France at the IIHF World Championship.

Stützle was hit into the boards while battling for a loose puck with his left knee seeming to absorb the brunt of the impact. He stayed down on the ice in obvious pain as play continued the other way and was helped to the dressing room shortly after.

The winger broke out in his sophomore season at the NHL level, scoring 22 goals and adding 36 assists in 79 games for the Senators. He had two assists through Germany's first two games at the men's World Championship before leaving in game three.

Germany went on to edge France 3-2 in their Group A showdown.