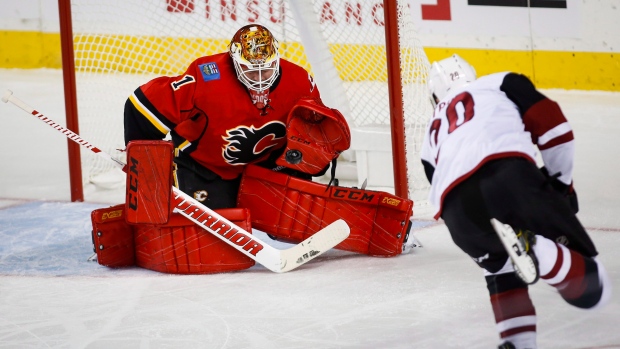 CALGARY — Eighteen-year-old Matthew Tkachuk continues to make a push to open the NHL season with the Calgary Flames.

Selected sixth overall in the 2016 draft, Tkachuk scored in regulation and also had the shootout winner Wednesday night as Calgary beat the Arizona Coyotes 2-1 in NHL pre-season action.

The only shooter to score in the shootout, Tkachuk broke in and displayed quick hands, zipping a shot into the top corner on Mike Smith, whom he skated with for a couple weeks during the summer.

"I guess he's got my number, he knows where my weaknesses are," said Smith, cracking a smile. "He's a good kid and he made a good move."

Hurting from the absence of unsigned restricted free agent Johnny Gaudreau, Calgary has only scored nine goals in the pre-season, but Tkachuk, the son of former NHL Keith Tkachuk, has two of them.

"You can see the talent in Matthew," said Flames coach Glen Gulutzan. "He's a tenacious worker, he's serious about the game and it obviously comes from the bloodlines... He's passing tests, day after day. It's going to make for a tough decision."

Calgary (4-2-0) closes out its pre-season in Vancouver on Thursday.

Christian Dvorak scored the lone goal for Arizona (4-1-2), which wraps up its exhibition schedule on Friday against San Jose, while Smith made 36 saves.

"Every game I've felt a little bit better and tonight I felt like I'm ready to go," said the 34-year-old Smith said.

Smith's best stop came late in the third with Calgary on its seventh power play. He sprawled across the crease to get a stick on a one-timer from Dougie Hamilton. Smith added six more saves in overtime.

Flames starter Brian Elliott, tested 22 times, also saved his best stop for the third, throwing up his glove to stab a shot from Anthony Duclair from 15 feet out.

Elliott was brought in from St. Louis in trade this summer to be the Flames No. 1 goalie, after a year in which Calgary's goaltending was the worst in the league.

Dvorak opened the scoring at 6:12 of the first period, deflecting a centring pass from Christian Fischer over Elliott's shoulder.

Calgary tied it 29 seconds later. Tkachuk found an open spot in the slot off the rush and one-timed a perfect centring pass from Sam Bennett through Smith's legs.

Notes: Sean Monahan (strained back) has been a regular participant in practice for two straight days, but the team has not decided if he will play Thursday. He has yet to play a game... In addition to unsigned RFA Johnny Gaudreau, Dennis Wideman was the other notable Calgary absentee... Arizona's scratches included Shane Doan, Martin Hanzal, Oliver Ekman-Larsson and Alex Goligoski.