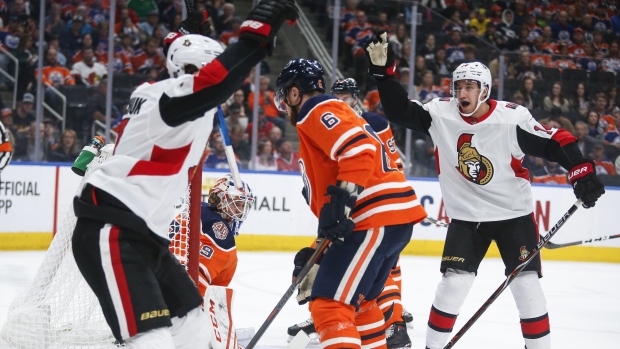 Brady Tkachuk scored his second of the game 2:09 into overtime as the Senators put a crimp in Edmonton's already slim playoff hopes with a 4-3 victory over the Oilers.

"It was really satisfying," said Crawford. "You need success in order to keep the guys focused in on doing the right things. I thought we played a really good game, it was one of the most complete games that we've played.

"We're going to make a few mistakes and we made a couple mistakes in coverage, but tonight we didn't complicate things. We didn't make two or three mistakes on many plays out there."

Senators goalie Craig Anderson made 26 saves to capture his first win since Dec. 21, snapping a personal streak of 14 straight losses in net.

"It's been a long-time coming," he said. "Personally it's been a tough stretch, obviously, to be close without (being) able to get there. Tonight we were able to get there and finalize it and get the win and it's just a great feeling to have."

Alex Chiasson, Connor McDavid and Colby Cave replied for the Oilers (33-34-8), who have lost three of their last four.

"It's like when we lost to New Jersey, it was the same type of team when you look at the standings," Chiasson said. "Tonight we play a team at the bottom of the standings and that has traded away four or five of its best players and they outwork us. In our position, that is not good enough."

The Senators struck first on the power play five minutes into the first period when Tkachuk banked the puck off of defender Adam Larsson and past goalie Mikko Koskinen from behind the net for his 18th goal of the season.

Edmonton knotted the game four minutes later when Chiasson was sent in on a breakaway and beat Anderson with a backhand shot.

Ottawa regained the lead with another first-period power-play goal as Ryan deflected a shot home from the doorstep.

The Oilers tied the game three minutes into the second period on a give-and-go passing play with Leon Draisaitl setting up McDavid for his 38th goal. McDavid tied his career high of 108 points with the goal.

The Senators once again surged ahead seven-and-a-half minutes into the third after a terrific pass from Magnus Paajarvi set up a goal by Gibbons. But Edmonton came back just 66 seconds later on a goal by Cave to eventually send the game to extra time.

Both teams are off until Tuesday, when the Oilers host the Los Angeles Kings and the Senators return home to face the Buffalo Sabres.

Notes: Both teams had their share of controversies this week with Oilers CEO Bob Nicholson publicly calling out the play of goalless forward Tobias Rieder at a season ticket holder's breakfast and embattled Senators owner Eugene Melnyk making disparaging comments on a radio show about Ottawa's fans, mayor and media, as well as the rebuild of the rival Toronto Maple Leafs… It was the second and final meeting between the two teams, with Edmonton winning the previous encounter 4-2 on Feb. 28... Senators defenceman Thomas Chabot returned to the lineup after missing four games with a broken toe… Oilers defenceman Andrej Sekera played his 700th NHL game.