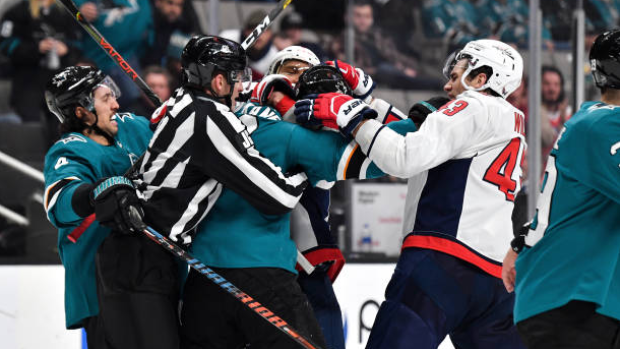 San Jose Sharks forward Evander Kane has been fined $5,000 after he was ejected for elbowing Washington Capitals defenceman Radko Gudas in the third period of Tuesday's loss to the Capitals.

San Jose’s Evander Kane has been fined $5,000, the maximum allowable under the CBA, for Elbowing Washington’s Radko Gudas.

Capitals head coach Todd Reirden said after the game he expected the league to follow up with the Sharks forward.

“It’s a high hit. It’s a reviewable penalty. The league will deal with it from there,” Reirden said after the Capitals' 5-2 victory. “But it’s the type of stuff we’re working to remove from the game.”

Kane, who had the puck in the neutral zone at the time, appeared to react to an impending hit from Gudas by raising his arm and striking the Capitals defenceman in the head. He received a five-minute major penalty for the infraction and a game misconduct. Sharks head coach Pete DeBoer said he does not believe Kane should receive supplemental discipline for the hit.

"I did see the Kane hit. Definitely a penalty. I don't think it's more than that. That's my opinion. But that's not my department," DeBoer said, per ESPN.

Gudas did not return after the incident, which occurred with just over five minutes to play in the final frame. Reirden said post-game he did not have an update on Gudas, but would provide an update on Wednesday.

Kane served a three-game suspension earlier this season for physical abuse of an official in the Sharks final preseason game. He also received a one-game suspension in the 2018 playoffs for cross-checking.

The 28-year-old scored his 13th goal of the season on Wednesday, bringing his point total to 23 in 26 games with the Sharks this season.