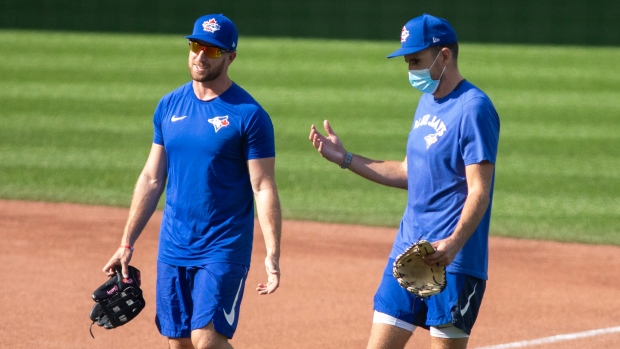 According to TSN Blue Jays Reporter Scott Mitchell, Toronto Blue Jays players have been told the penalty if they are seen outside the ballpark/hotel bubble is a $750,000 fine and potential jail time.

Here is what’s going to keep #BlueJays players in their stadium/hotel bubble this summer:

Per multiple sources, players have been told penalty if seen outside ballpark is $750,000 fine and potential jail time.

The Blue Jays began living at the Toronto Marriott City Centre Hotel connected to the Rogers Centre on Monday for spring training as they prepare for their season opener against the Tampa Bay Rays on July 24.

Toronto manager Charlie Montoyo said in a conference call on Wednesday that about 46 players are on hand at Rogers Centre and about 12 others are working out at the spring training facility in Dunedin, Fla..

On Sunday night, most players arrived in Toronto via charter flight with a second charter expected to fly in later this week.

Players need to be cleared with two negative COVID-19 tests to join training camp. The team has yet to confirm any reports regarding multiple players and staff testing positive for COVID-19.

According to several reports, the latest case involved a one player in Florida which forced 12 players to remain in Dunedin, according to USA Today.