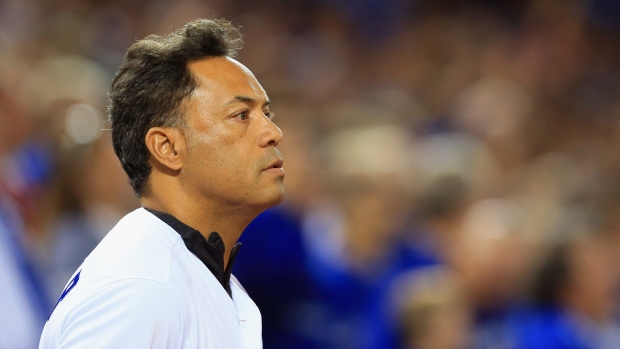 The Toronto Blue Jays cut all ties with Hall of Fame second baseman Roberto Alomar on Friday after Major League Baseball placed him on the league's ineligible list following an investigation into a 2014 sexual misconduct allegation.

MLB commissioner Rob Manfred issued a statement Friday, saying that his office requested an independent investigation into the allegation be conducted by an external legal firm. After a review of the evidence from that completed investigation, Manfred concluded that Alomar violated MLB’s policies.

The Blue Jays said in a statement that they are “severing all ties with Alomar, effective immediately,” removing Alomar’s name from the Level of Excellence and taking down his banner at Rogers Centre. The club also said it supports MLB’s decision to terminate Alomar’s consulting contract.

“The Toronto Blue Jays support Major League Baseball’s decision to terminate Roberto Alomar’s consultant contract and place him on its Ineligible List. Commissioner Manfred concluded that Alomar violated MLB’s policies following an investigation into an allegation of sexual misconduct that was recently made against Alomar from an incident that occurred in 2014. Based upon this conclusion and our review of the investigation’s findings, the Blue Jays are severing all ties with Alomar, effective immediately.

“The Blue Jays are committed to advancing respect and equity in baseball and are taking further action by removing Alomar from the Level of Excellence and taking down his banner at Rogers Centre.

“We commend the courage demonstrated by the individual who bravely came forward, and in order to respect their privacy, the organization will have no further comment at this time,” the club said in a statement.

“The Toronto Blue Jays believe in creating a safe, inclusive, and empathetic environment, where everyone involved in our game is respected. I am reaffirming our organization’s commitment to our employees, fans, media, and partners to uphold a culture of respect that treats all individuals with dignity,” president and CEO Mark Shapiro said.

Alomar released a statement of his own Friday afternoon.

“I am disappointed, surprised, and upset with today’s news. With the current social climate, I understand why Major League Baseball has taken the position they have. My hope is that this allegation can be heard in a venue that will allow me to address the accusation directly. I will continue to spend my time helping kids pursue their baseball dreams. I will not be making any further comment at this time.”

Alomar’s name was added to the Blue Jays’ Level of Excellence in 2008 following a career with Toronto spanning from 1991 to 1995 that included five All-Star teams, five Gold Gloves and two World Series trophies.

In 2011, Alomar was elected into the National Baseball Hall of Fame. Chairman of the Board Jane Forbes Clark released a statement Friday.

“The National Baseball Hall of Fame was shocked and saddened to learn of the news being shared today about Roberto Alomar. When he was elected to the Hall of Fame by the Baseball Writers’ Association of America in the Class of 2011, Alomar was an eligible candidate in good standing. His plaque will remain on display in the Hall of Fame in recognition of his accomplishments in the game, and his enshrinement reflects his eligibility and the perspective of the BBWAA voters at that time.”

The infielder started his 17-year big league career with the San Diego Padres in 1988 and also spent time with the Baltimore Orioles, Cleveland, Arizona Diamondbacks, Chicago White Sox and the New York Mets before his retirement in 2005.​